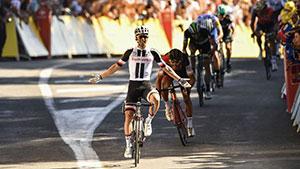 Chris Froome needed just two days to reclaim the yellow jersey he lost in the Pyrenees as he snatched it back from Fabio Aru on the short but sharp climb into Rodez on Saturday.

Australian Michael Matthews claimed victory on stage 14 of the Tour de France but Team Sky’s Froome was the biggest winner as he finished seventh, taking 24 seconds out of Aru to move back to the top of the general classification.

It was as unexpected as it was welcome for the three-time Tour winner. Although the gradients in the finale hit 10 per cent, the climb lasted only 600 metres so it had seemed unlikely the margins would be so great.

“I am absolutely shocked to see the same kind of time gaps as we saw in the Pyrenees,” said Froome, who now leads by 18 seconds from Aru with Frenchman Romain Bardet of AG2R La Mondiale 23 seconds back in third.

The 181.5 kilometre stage from Blagnac was billed as one for the punchers and so it proved as Team Sunweb’s Matthews took victory ahead of Olympic champion Greg Van Avermaet of BMC, but the real action lay just behind.

Froome lost the yellow jersey on Thursday’s stage to Peyragudes when he was left behind on the steep inclines of the mountaintop airstrip.

He had insisted that was just a bad day, and there was certainly no shortage of power in the way he attacked the final ascent here.

“I just didn’t have the legs on that day but I’d like to think I’ve bounced back since then,” Froome said. “After two consecutive really hard days, it really brings out the stage racer in people and we see just exactly where everyone is at.”

Although Froome has been the one facing questions over how united his team – and specifically Mikel Landa – might be behind him, it was Astana’s Aru who was left short of support on the approach to Rodez as Sky expertly shepherded Froome to the foot of the hill.

As splits began to appear in the peloton when the gradients ramped up, Aru was out of position and out of luck.

“I believe my advantage was thanks to my team-mates and the work they did,” Froome said. “In that really technical descent to the final, they kept me in the best position to take the right lines through the corners and then coming to the climb without having done any really big efforts.

“Especially Michal Kwiatkowski, he was incredible to follow, and then in the last hundred metres he was screaming in the radio, ‘Go, go, go Froomey! Gaps are opening up!’ It was amazing to hear that and gave me a lot of motivation.”

Irishman Dan Martin and Colombian Rigoberto Uran were with Froome at the line to strengthen their places in the overall top 10 while others lost pockets of time.

Cannondale-Drapac’s Uran sits fourth, 29 seconds down, with Landa 77 seconds off the pace in fifth place.

Quick-Step Floors’ Martin once again defied the back problems he has been suffering since a crash on the Mont du Chat last week with a fine ride, and is now only 86 seconds off yellow in sixth place.

It was a second career Tour stage win for Matthews on just his sort of territory. Van Avermaet had won when the Tour tackled this finish in 2015, with the Australian left to watch from behind as he rode with four broken ribs following an earlier crash.

This time he had no such burdens and was able to burst clear on the final ramp and begin his celebrations before the line.

“I wasn’t able to contest it the last time with four broken ribs but I guess it was just recon for this year,” said the 26-year-old.

“In the end I just had to position myself right and just had that little kick over the mound and round the last 50 metres.”

It is a second win in as many days for Sunweb after Frenchman Warren Barguil delivered a Bastille Day victory in Foix on Friday.

Attention now turns to Sunday’s 189.5km stage from Laissac-Severac L’Eglise to Le Puy-en-Velay, seen as one for a breakaway but far from an easy afternoon ride with two category one climbs along the way.

“It’s the last day before the rest day so I expect it will be all hands on deck again,” Froome said. “It’s going to be war.”

But if Froome had remained the favourite to win the Tour even after Thursday’s wobble, he has only reinforced that notion now he is back on top.

“We’ve given up the yellow jersey once and I’ve seen a pretty disappointed Froomey when he had to hand it over,” Sky’s Luke Rowe said. “He won’t do it again.”