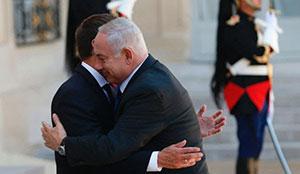 Speaking at a ceremony commemorating the victims of the mass roundup of Jews in Paris in WWII, the French president assailed Le Pen and said France must take responsibility for the Vichy regime and Nazi collaboration

PARIS – French President Emmanuel Macron delivered forceful remarks on Sunday at a ceremony marking the 75th anniversary of the deportation of Jews from Paris, attacking his political rival Marine Le Pen and other figures who claimed that the Vichy government which collaborated with the Nazis during WWII didn’t represent France.
Prime Minister Benjamin Netanyahu attended the ceremony in Paris alongside Macron.
“There are those who say Vichy wasn’t France,” Macron said. “It’s true that Vichy wasn’t all of France, but Vichy was the government of France and the French establishment It was responsible for deporting French Jews, and not the Germans.”
Macron said that denying or hiding France’s role in WWII is a disgrace.
“We have a responsibility to realize where and when we have failed,” he said. “The underground and those who rescued Jews saved France’s dignity, but the Vichy government was the reality. It’s convenient and easy to see Vichy as something perpetrated by foreign agents but it was the reality. You can’t build pride on a lie.”
Macron condemned Holocaust denial and anti-Semitism in France today, saying that it has taken a new shape, and that anti-Zionist and anti-Israel expressions should be opposed. “It’s a new type of anti-Semitism,” he said.
At the ceremony, Netanyahu lauded Macron’s statement from a few days ago that France in a war of civilizations against radical Islamic terrorism.
“Your struggle against militants Islam is our struggle,” he said. “We must stand against them together and defeat them together.”
Following the ceremony, Netanyahu arrived at the Élysée Palace for a sit-down with Macron.