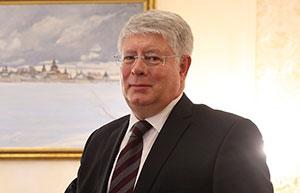 GENEVA, /TASS/. The discussion on de-escalation zones has had a positive impact on the Syrian opposition’s mood in Geneva, Russia’s Permanent Representative at the UN Office and Other International Organizations in the Swiss city Alexey Borodavkin said on Saturday.

“The Astana process has had a very positive impact on the situation and atmosphere of talks in Geneva,” the diplomat said. The opposition delegation has revised its stance showing more understanding that mending ties with Damascus is necessary for carrying out reforms and changing the constitution in Syria, setting up new governing bodies, holding fair elections and combating terrorism, he said.

“The Astana process and the agreement on de-escalation in four zones have affected the opposition leaders in a positive way,” Borodavkin said. “Now they are holding talks much more constructively and try to show flexibility if possible.”

The Riyadh group of Syrian opposition has changed its stance on President Bashar Assad, announcing no demand for his immediate departure at the Geneva talks, Borodavkin said.

“Under the influence of Astana, Russian-US contacts at the highest level in Hamburg and statements of leaders and foreign ministers of major players on Syria, the High Negotiations Committee (Riyadh group) changed its position,” the diplomat said.

During the talks, the opposition members did not mention the need for the immediate departure of Assad and the legitimate Syrian government, he noted.

“Finally, it seems that even the radically-minded opposition members and their foreign sponsors understand that first peace should be established in Syria. And then an agreement may be reached on a political reform as soon as the situation in the country normalizes,” Borodavkin said.

“So, the goal of the opposition has been somehow changed. Now they speak not about toppling the legitimate government led by Bashar Assad but about reaching agreements with him on a political reform,” the diplomat said.

Extremist elements insisting on the departure of Syrian President Bashar Assad remain in the Riyadh group of the opposition, diplomat said. “There are still drawbacks in the negotiating process. I should say the major one is that unfortunately the Riyadh group at these talks still includes extremist-minded elements that demand, though in a low voice, the departure of the legitimate Syrian President Bashar Assad,” the diplomat said.
Direct talks

Moscow believes that the Syrian government and the opposition may launch direct talks by the new Geneva round in September if the opposition unites on a constructive basis, Borodavkin said.

UN Special Envoy for Syria Staffan de Mistura told the UN Security Council on Friday that the opposition would continue efforts on consolidating the delegation between the rounds of talks, Borodavkin said. “The round has ended, and the next one will be in early September. During this time (in August) extra efforts will be made to unite the delegations of the Moscow, Riyadh and Cairo groups.”

“I hope by September the opposition will be able to consolidate its joint stance, and it should be constructive and aimed at achieving agreements with the government on all the ‘four baskets,’” the diplomat said. “If this happens, if such consolidation occurs and it develops a constructive stance aimed at holding talks rather than declaring ultimatums, this will pave the way for direct talks already at the next round,” he said.

Russia positively assesses the growing attention of the Geneva talks parties to the fight against terrorism, Borodavkin said. Speaking on his stance regarding de Mistura’s seven-point proposal on countering terrorism, the diplomat said: “This initiative should be studied, but I want to stress: the mere fact that the talks focus on the fight against terrorism is a very positive sign.”

The diplomat noted that these points should be analyzed and developed in order to reach cooperation “in line with the document that will be drafted at the negotiations.”

According to Borodavkin Moscow expects that the sides will agree on de-escalation zones in Syria by the new round of Geneva talks in September. “In Astana, certain technical issues were discussed (on de-escalation zones) which need to be further agreed,” Borodavkin said. “I think this will be done before the beginning of the next round of the Geneva talks,” diplomat said.

“We have always supported and are supporting efforts of the special envoy, his team and his office,” Borodavkin said. “They show, especially recently, that they are focused on active assistance to the negotiating process, they are acting in a quite balanced manner and seeking opportunities to move ahead. Basing on the main players’ common opinion, they are putting forward new balanced and right proposals.”

The fight against terrorism topped the talks, he noted.

“The focus on anti-terror is a very correct and much needed decision of de Mistura’s office,” he said. “We will keep supporting UN fellow workers’ efforts and if needed, if they ask us for it, we will give them recommendations and advice.”
Macron’s initiative

Russia believes it is positive and important that French President Emmanuel Macron’s initiative includes no demand on the immediate departure of Assad, Borodavkin said.

“It is important that this initiative is based on that France no longer demands Assad’s immediate departure. This is a fundamental change,” the diplomat said, voicing hope that the Western countries “think first of all about achieving peace and normalization in Syria and the war on terror.”

“If this is done, political reforms may be carried out,” the diplomat said. “This is very good” that toppling Assad is not the priority of these states, he noted.

According to Borodavkin Moscow welcomes the consolidation process of the Syrian opposition at the Geneva talks. “We talked during this round to the delegation of the High Negotiations Committee (the Riyadh group), its separate representatives and the Moscow and Cairo groups at a working level,” the diplomat said.

“All of them told us that there is certain rapprochement in positions of the groups. We welcome that this consolidation is happening,” Borodavkin said.

Russia has always insisted that the opposition should “develop a single position” at the talks, he noted. “The position should be constructive and aimed at reaching compromise with the delegation of the government and achieving agreement rather than declaring ultimatums and impossible conditions,” the diplomat said.

“The positions of different groups should unite on such a constructive basis,” he stressed. “We hope that the creation of a consolidated single opposition delegation will allow switching to direct talks between the government and the opposition,” Borodavkin said.

On Thursday, Macron said after talks with US President Donald Trump in Paris that France would no longer demand ousting Assad, whose representatives should take part in the discussions on Syria’s future. The French leader underlined the need to ensure long-term political stability in Syria. Besides military operations a diplomatic initiative is needed, Macron stressed. The sides agreed to initiate the creation of a contact group bringing together permanent members of the United Nations Security Council, representatives of regional powers and other parties concerned, he said.

On July 10-14, Geneva hosted the seventh round of intra-Syrian talks between the Syrian government’s delegation and three opposition groups (Cairo, Moscow and Riyadh or the High Negotiations Committee). The next round of negotiations is due to be held in September.