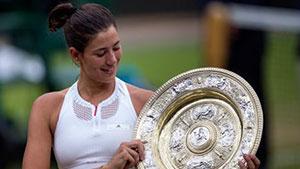 Williams, 37, was bidding to become the oldest female grand slam singles winner in the open era but Muguruza, 14 years her junior, produced an emphatic performance to claim the trophy.

It is Muguruza’s second major title, adding to the French Open crown she won last year, and makes her the first Spanish woman to win the singles here since her coach Conchita Martinez in 1994.

When the 23-year-old’s challenge revealed Williams’ last forehand to have landed long, she crouched down in disbelief with her face planted in her hands.

Muguruza earns £2.2million for this win at the All England Club which also makes up for finishing runner-up to Venus’ sister Serena in the final of two years ago.

When Muguruza landed her first major title at Roland Garros last year, she had been circled as the natural successor to Serena as the queen of women’s tennis.

Results, however, had largely failed to meet expectations until this year, when she has rediscovered the sort of form to suggest this will not be her last grand slam success.

She then showed ruthlessness in the second as she blew Williams away in six games that lasted just 26 minutes.

“I had I think the hardest match today against Venus,” Muguruza said.

On losing to one Williams and then beating another, Muguruza said: “Two years ago I lost in the final here to Serena. She said maybe one day I will win. So here I am.”

Muguruza had not yet turned four when Williams played her first match in the main draw at SW19 and the American may never have a better chance to win her eighth grand slam title.

“I know how hard you work and I’m sure this means so much to you and your family. Well done today, beautiful.”

Spitting rain meant the contest started with the roof closed on Centre Court and under it Virginia Wade, Martina Navratilova and the former King of Spain no less, Juan Carlos de Borbon, were all watching on from the Royal Box.

Williams started with an 109mph ace and if anyone was nervous it was one of the line judges, who let go a serve which on review was shown to have been half a yard out.

Muguruza, with her left thigh strapped, opened with a double fault, the first of five in the opening seven games alone as each invited early pressure onto their serve.

Neither took advantage but Williams came again at 5-4, this time with two set points when Muguruza missed a pair of routine forehands.

A breathtaking 19-shot battle from the baseline might have turned the match a different way but Williams hit the net before a booming Muguruza serve averted danger.

Now, at 5-5, it was Muguruza’s turn to crank up the pressure. She missed one break point but grabbed the second as Williams finally caved with a floating forehand long.

The crowd held its breath as Muguruza emerged to serve it out and then opened up two set points when a brilliant backhand defence looped over Williams and onto the line. Williams slapped into the net again and Muguruza moved one set to the good.

Williams had come within a whisker of winning the opening frame but you would not have known it in the second as Muguruza snatched an early break and then two more to lead 5-0.

All the momentum and belief seemed to have vanished from Williams’ game and the only disappointment for Muguruza was that her celebration had to wait for the result of her review. When it arrived she could barely hold back the tears.