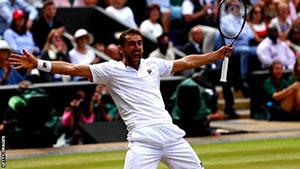 By Piers Newbery-BBC Sport at Wimbledon
Roger Federer will attempt to become the first man to win eight Wimbledon titles when he takes on Marin Cilic in the final on Sunday.
The Swiss, 35, can overtake the mark set by Pete Sampras in 2000, and Williams Renshaw in 1889, with victory in his 11th Wimbledon final.
Cilic, 28, held match points against Federer at last year’s Wimbledon and hopes to add to his 2014 US Open win.

“It makes me really happy, marking history at Wimbledon,” said Federer.
“It’s a big deal. I love this tournament. All my dreams came true here as a player. To have another chance to go for number eight now, to be so close now at this stage, is a great feeling.”
There will be a British champion on Sunday, with the men’s final followed by the mixed doubles final, which features top seeds Jamie Murray and Switzerland’s Martina Hingis against defending champions Heather Watson and Finland’s Henri Kontinen.
Federer had to wait five years to take his Grand Slam tally to 18 titles with his stunning Australian Open victory in January, and just six months later he is the favourite to make it 19.
The oldest male finalist since the 39-year-old Ken Rosewall lost to Jimmy Connors in 1974, the fact that Federer is a month short of his 36th birthday has been irrelevant to his form on court.
It is 14 years since Federer won his first major title when he beat Australia’s Mark Philippoussis on Centre Court, and five since he beat Andy Murray to win his last Wimbledon title.
“I don’t feel like [2012] is that long ago, to be honest,” said the Swiss.
“2003 feels like ages ago, because of the ponytail, the beard, whatever, you name it. This one is different. I kind of look the same as back in 2012, or at least I hope so.”
His hairstyle might have changed but Federer’s game is, if anything, better than ever in his mid-30s.
He has yet to drop a set and has lost just four service games over the course of six matches at the All England Club.
Cilic will provide a familiar challenge, with Federer leading their head-to-head 6-1, but their last two meetings suggest a close final could be in prospect.
Federer fought back from two sets and three match points down to win their Wimbledon quarter-final last year, which followed Cilic’s three-set demolition job on his way to winning the 2014 US Open.
“He was confident and feeling it and seeing it,” recalled Federer. “It was very, very impressive.”
However, the seven-time champion remains the favourite he was labelled before the tournament began.
“Unbelievably excited,” is how Federer described his mood. “I hope I can play one more good match.
“Eleven finals here, all these records, it’s great. But it doesn’t give me the title quite yet. That’s why I came here this year. I’m so close now, so I’ve just got to stay focused.”

Cilic has come through a side of the draw where reigning champion Murray and French Open winner Rafael Nadal were fancied to battle it out for a final place, but the Croat has been the man in grass-court form.
After losing to Feliciano Lopez in the Queen’s Club final having had a match point, Cilic has looked like a contender throughout Wimbledon.
He arrives in the final in second place in the aces chart with 130, but also top of the first-serve return standings.
And Cilic is taking the positives from last year’s agonising loss to Federer in the quarter-finals.
“Twelve months ago, I was one point away from winning a match here against him,” he said.
“Definitely I believe in my own abilities to get through and to win it. But I still know that it’s a big mountain to climb.
“Roger is playing maybe some of his best tennis of his career at the moment, having a great season, so I know it’s going to be a huge challenge. But I believe I’m ready.”
A huge serve with an excellent return, it has been an ongoing surprise that Cilic has not threatened for Grand Slam titles more often, something many put down to his affable nature.
Cilic said: “Obviously people are asking always, ‘Do you need to be more arrogant? Do you need to be more angry on the court, to be more selfish to be able to win more constantly?’
“For me, I wouldn’t agree. There is not one formula for that.
“I’m still a nice guy on the court, too, I believe. You should ask players around.”
His could not be more different in nature to Goran Ivanisevic, the first Croat to win Wimbledon in 2001 – a match watched at a tennis camp by the then 12-year-old Cilic.
One win from matching his former coach’s achievement, Ciic said: “It would mean the world to me. It would be absolutely a dream come true to win Wimbledon.”
Analysis
Tim Henman, four-time Wimbledon semi-finalist:
Cilic has grass-court pedigree, he’s massively confident and he’s beaten Federer before. He’s the underdog but will fancy his chances.
He has to got out there with a clear game plan and try to bully Federer. The more time you give Federer, the more opportunity it is for him to make you do the running.
Cilic needs to have the mindset that he’s had a fantastic tournament, Federer is the favourite and he hasn’t got much to lose and really go for it. He doesn’t want to be passive and come off the court and wish he’d gone for it more.
John McEnroe, three-time Wimbledon champion:
Federer is playing at a far higher level than he was last year, and he’s healthier and moving better. You throw in those factors and it swings heavily in his favour. It’s important to point out that it’s Cilic’s first final here, but it’s not his first Grand Slam final. Although, you play Kei Nishikori or Roger Federer, that is a huge difference mentally.
This is going to be a tall order for Cilic any way we paint it, but I believe he’s got the weapons. He’s got to take the racquet out of Federer’s hands.