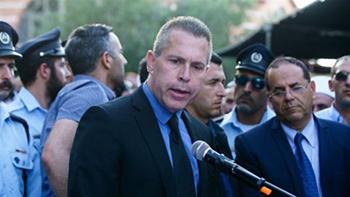 Israel’s Public Security Minister Gilad Erdan says he is considering demolishing the homes of Arab-Israelis in the wake of a deadly attack at the Haram al-Sharif which Jews call Temple Mount.
The attack carried out by three residents of the northern city of Umm al-Fahm on Friday left two Israeli police officers dead, sparking an elaborate security crackdown in the region.
Erdan said “as the likelihood that others will follow their example increases, we will have to consider the demolition of their homes,” Israeli media reported on Monday.

The decision comes even as Israel’s “high court of justice” ruled against the demolition of the homes of the Israeli killers of East Jerusalem al-Quds teenager Muhammed Abu Khdeir, who was murdered in a grisly 2014 attack.
Israel employs the draconian measure of home demolitions against the families of Palestinians accused of terrorism, arguing it serves as a deterrent for further attacks. Critics say the practice unjustly punishes whole families for crimes they have not committed.
Arab lawmakers in the Knesset said the Israeli leaders were exploiting the Friday incident to further restrict Palestinians in the occupied territories and make life harder for them.
MK Ayman Odeh said Israeli Prime Minister Benjamin Netanyahu is transforming the conflict into a religious one, following measures adopted to restrict access to the Haram al-Sharif, which was closed after the attack.
Israel reopened the site outside al-Aqsa Mosque on Sunday, but tensions persisted as Palestinians protested the new metal detectors placed at the entrance to the compound.
The new equipment fanned protests that Israel had unilaterally changed the rules regarding religious worship and “tourist” visits by Israeli extremists at the complex.
“Prime Minister Netanyahu, he is the one who wants to turn the conflict from a political conflict to a religious one, and this is why he sponsors provocative entries by settlers to the compound of the [al-Aqsa] Mosque,” Odeh said.
Another Arab lawmaker, MK Issawi Frej, hit out at the new decision to demolish Palestinian homes.
“There are those who are hurting from the events of last Friday, and there are others like Minister Gilad Erdan who are exploiting them to instigate more incitement and hatred,” he said.
“Where were these threats when Israelis burned to death a Palestinian boy, or when an Israeli soldier murdered in cold blood Muslim and Christian Israeli citizens in Shfaram. We do not fight hatred through discrimination,” Frej said.
He was referencing the Abu Khdeir murder as well as the 2005 killing of four Arab Israelis after army soldier Eden Natan Zada opened fire on a public bus traveling through Shfaram, wounding 12 others.
On July 31, 2015, Israeli settlers killed another Palestinian baby, when they threw firebombs and Molotov cocktails into two Palestinian houses in the Duma Village, some 25 kilometers southeast of the city of Nablus in the West Bank, setting them ablaze while their inhabitants were asleep. The arson attack killed an 18-month-old baby, Ali Dawabsheh, and critically wounded his father and mother, Sa’ad and Riham, who later succumbed to their injuries.
Israeli authorities have responded to such incidents with a typical composure, where the cases have got stuck in protracted legal proceedings and justice has hardly been served.
After the Friday attack, however, Israel closed down the al-Aqsa Mosque compound, briefly detained Sheikh Muhammad Hussein, the grand mufti of Jerusalem al-Quds, and cancelled Muslim Friday prayers at the site.