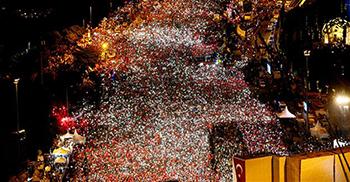 Millions of people have begun marking the first year anniversary of the July 15, 2016, failed coup attempt in all 81 provinces, with people in Istanbul gathering on July 15 Martyrs Bridge, where President Recep Tayyip Erdoğan said citizens had beaten well-equipped coup soldiers thanks to their belief.

“Did our citizens have guns in their hands,” said Erdoğan, who marched toward the bridge from his residence in Kısıklı with the families of the coup night victims, while addressing hundreds of thousands of people late on July 15.

“Just like today, they only had flags in their hands. But they had an even stronger gun. Their belief,” he said, naming the coup soldiers “unbelievers.”

Citizens watched the ceremony and Erdoğan’s speech online on wide screens at city centers across the country.

Erdoğan called main opposition Republican People’s Party (CHP) leader Kemal Kılıçdaroğlu a “coward” for not hitting the street during the coup attempt, but “watching the incidents on TV at a house in Istanbul.”

“I would not call him to Yenikapı rally if I had known,” referring to an August 9, 2016 rally of unity and solidarity, which was attended by the ruling Justice and Development Party (AKP), the CHP, and the Nationalist Movement Party (MHP).

Erdoğan once again slammed Kılıçdaroğlu for naming the attempt a “controlled coup.”

“If you have noticed, two groups use this term. First, FETÖ followers and foreigners who support them. Second, the leader of the main opposition party,” Erdoğan said, referring to the Fethullahist Terrorist Organization (FETÖ), widely believed to have been behind the thwarted coup.

President Erdoğan also reiterated his earlier comments on reinstating the death penalty, saying that he would approve such a law if the parliament passes it.

Moreover, the president said the arrested suspects in anti-Gülen probes might wear uniforms when appearing before judge.

“These are the good days of the FETÖ members. Recently we talked with Mr. Prime Minister. They should wear uniforms like they do at the Guantanamo [prison] while going to court.”

His remarks came after a Gülen suspect tried to appear before judge with a t-shirt reading “Hero” in English on it.

Guantanamo is a United States military prison located within Guantanamo Bay Naval Base in Cuba, where mostly jihadist terror suspects are kept.

A monument commemorating the 250 victims was inaugurated with a ceremony after Erdoğan’s speech.

“We won’t forget or make anyone forget July 15,” Yıldırım told journalists on his way to the bridge, adding that the march is being carried out for the people.

“People are still angry. The struggle will continue until there is no FETÖ member is left,” he also said.

During his speech on the rally area, Yıldırım said “we were never hopeless and will never be.”

“They will meet with a painful end. They will diminish in their own swamps. We never surrendered or will surrender to violence,” he also said.

Names of the 250 people killed by coup soldiers were read out after his speech.

Thousands of people got on ferries from Yenikapı in Istanbul’s European side to reach Beylerbeyi on Asian side to attend the “July 15 Democracy and National Unity Day” event on the bridge.

President Erdoğan examined the area from above in a helicopter, before heading to his residence in Kısıklı. F-16 jets accompanied Erdoğan’s flight from Ankara to Istanbul earlier.

Some 250 lights were set around the rally area to commemorate 250 people killed during the attempted coup.

Majority of the people are carrying Turkish flags, while pictures of those killed during the attempted putsch and banners with slogans against Gülenists were also seen.

Some people were seen holding nooses while chanting “We want death penalty.”
Strict security measures were taken around the bridge and thousands marched from Beylerbeyi, Çengelköy, Altunizade and Kısıklı.

Even though the official start of the marches towards the bridge was set to begin on 6:30 p.m. and the rally was set to start on 8 p.m., thousands of people filled the rally area hours earlier.

Pictures of those killed on July 15, 2016, coup bid are being shown on a screen built on the rally area.

An Ottoman-style military band known as “Mehter” performed on stage.

Illuminated anti-coup slogans have been hung between the minarets of some of Istanbul’s greatest Ottoman mosques.

Some 25,000 police officers are on duty in Istanbul.

In the capital Ankara, meanwhile, thousands of people have started a march from Ulus, the gathering point, to the parliament building, before Erdoğan’s arrival to the city from Istanbul.