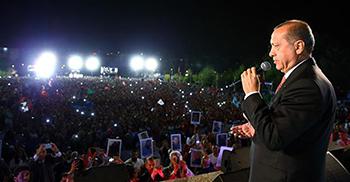 President Recep Tayyip Erodğan praised parliament’s bravery during the coup attempt on July 15, 2016, while addressing thousands of people at a ceremony in front of the general assembly building.

“The coup soldiers disgraced themselves when bombing the parliament as our lawmakers stood higher,” Erdoğan said at the ceremony that begun at 2:23 a.m., the time that the parliament was bombed on July 16, 2016.

“We will now work harder not to touch parliament again,” he said.

The parliament was the place where the coup pilots bombed most intensively, Erdoğan said praising the 106 lawmakers who reached the parliament building during the coup attempt and kept working despite attacks.
Erdoğan
once again slammed main opposition Republican People’s Party (CHP) for using the term “controlled coup.”

Erdoğan arrived in Ankara after midnight, following ceremonies in Istanbul.

Parliament Speaker İsmail Kahraman also addressed the crowd that marched from the Ulus neighborhood of the capital city to the courtyard of the parliament.

The CHP decided not to attend the night ceremony following a dispute over the list of speakers at the meeting. However, Kılıçdaroğlu addressed on July 15 a special parliament session on the coup attempt’s anniversary.

The National Movement Party (MHP) decided to attend both ceremonies.

A video was reflected on the walls of parliament at the start of the ceremony.

The celebrations in Istanbul and Ankara were watched on wide screens at city centers across the country.

The hotel where Erdoğan narrowly escaped an assassination plot in the attempted government overthrow was the site where demonstrators gathered to remember the martyrs of the defeated coup one year later.
Demonstrators waved Turkish flags and Erdoğan posters outside the

Grand Yazıcı Marmaris Hotel in the Marmaris district of the southern province of Muğla as the names of the July 15 martyrs were read aloud. “Here” was the response after each name.

Erdoğan was staying at the hotel while on a vacation with his family when the coup plot went into effect.
The president left for Istanbul after being alerted to the coup bid and narrowly escaped an armed attack on the hotel 15 minutes after he left. Two policemen were killed.

Three of 47 soldiers who tried to assassinate Erdoğan on orders from Fetullah Gulen, the leader of the Fetullah Terrorist Organization (FETÖ), managed to escape after clashes with police.

Moments after the attempted overthrow was launched, Erdogan urged citizens in a televised message to “go to squares” and “give the best answer” to those who attempted the coup.

Turkish-Americans were joined July 15 in Times Square by representatives from a number of Muslim nations to commemorate the first anniversary of the July 15 defeated coup attempt in Turkey.

Organized by Turkish non-profit, Cihannuma USA, the dozens of demonstrators chanted, “Martyrs never die, the motherland will live on.”