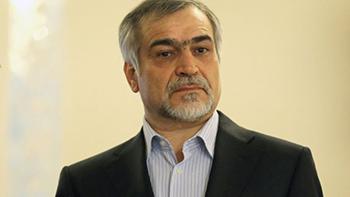 By Ladane Nasseri
Iran detained the brother of President Hassan Rouhani over unspecified “financial issues,” the state-run Tasnim news agency reported, citing the judiciary. A Chinese-American man also was given a 10-year prison sentence for allegedly “infiltrating” the country.

Hossein Fereydoun, the president’s brother, was taken into custody and is eligible for bail, Tasnim cited Judiciary spokesman Gholamhossein Mohseni-Ejei as telling reporters on Sunday. Mohseni-Ejedi didn’t elaborate on why Fereydoun, who served as an aide to the president during nuclear talks that led to the 2015 agreement between Iran and world powers, was arrested.
Some of Rouhani’s political opponents have condemned the nuclear deal, which served to curb Iran’s nuclear program in exchange for sanctions relief, saying the president and his team were too lenient and that the agreement has failed to reap economic benefits for Iranians as they promised. Fereydoun was accused of corruption by some conservative politicians in recent months.
Rouhani, a politically moderate cleric, was re-elected in May for a four-year term. His inauguration is planned for next month.
The dual Chinese-American national sentenced to prison was identified as Xiyue Wang, a 37-year-old history researcher, the Associated Press reported, citing Mizan Online, a website affiliated with Iranian courts. His detention wasn’t previously known. Wang was arrested last August and was a graduate student at Princeton University in New Jersey, Mizan said, according to AP.