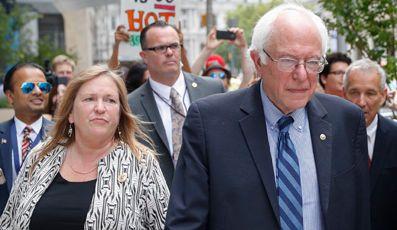 FoxNews.com
Sen. Bernie Sanders’ wife, Jane Sanders, is crying sexism against the man responsible for an FBI investigation into the allegations she fraudulently obtained a loan for the Vermont college she once oversaw.

“I find it incredibly sexist that basically he’s going after my husband by destroying my reputation, and that’s not OK,” Jane Sanders told The Boston Globe.
The FBI investigation began in early 2016 after Brady Toensing, a former official for Donald Trump’s presidential campaign in Vermont and now a candidate for U.S. attorney in the state, filed a complaint alleging Jane Sanders committed bank fraud.
Toensing, according to the Washington Examiner, started researching Jane Sanders in 2014, years before her husband Sen. Sanders, I-Vt., would run for president.
Jane Sanders led the small liberal-arts school Burlington College from 2004 to 2011. The college closed in 2016 after struggling to pay back creditors, and ultimately lost its accreditation.
“Jane Sanders must think Hillary Clinton’s campaign was sexist for viewing the alleged bank fraud as a major issue, too,” said Michael Ahrens, Rapid Response Director for the RNC. In publicly leaked emails from Clinton’s presidential campaign in 2015, Clinton’s team looked into using Jane Sanders’ role in the college’s failure against then-candidate Bernie Sanders.
The opposition research by the Clinton campaign, which highlighted Jane Sanders’ connection to Burlington College and its financial downfall, shows that both ends of the political spectrum speculated about her connection to the school’s monetary collapse.
Toensing said he wants everyone to be treated fairly, regardless of their status.
“My goal is for a full, fair, and impartial investigation – that’s all I care about,” Toensing told the Globe. “That people be treated the same regardless of status in this system.”
Fox News’ Joe Weber contributed to this report.