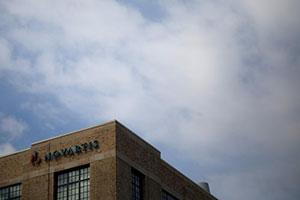 John Miller
ZURICH (Reuters) – Switzerland’s Novartis is stocking up cheaper versions of the world’s top-selling arthritis medicines, hoping a broad portfolio gives it an edge on rivals with narrower offerings.

These name-brand drugs raked in $32 billion in 2016, though sales have lost momentum as copies hit the market.

Novartis generics unit Sandoz contends having knock-offs of all three big “anti-TNF” drugs against disorders such as psoriasis, rheumatoid arthritis and ankylosing spondolitis will raise its portfolio’s allure for cash-strapped health care systems.

Novartis, which releases half-year results on Tuesday, is counting on biosimilars helping it kick-start lagging growth starting in 2018.

“We can leverage resources across multiple products when commercializing and can offer disease management solutions based on the full portfolio, rather than just product-specific offerings,” Carol Lynch, Sandoz’s biosimilars development head, said in an email.

South Korea’s Samsung Bioepis has similarly broad aims, with its own Remicade, Enbrel and Humira imitations.

While these drugs seem to be targeting the same patients, experts said disease variation, doctor preference and payer practices in heterogeneous markets may underpin having a so-called multi-drug “portfolio offering”.

In Nordic countries, where biosimilar adoption has been rapid, government-set pricing may favor one medicine one year, another the next.

In Switzerland, rheumatology needs are mainly served by small private practices without infusion facilities. That has made self-injectable Enbrel and Humira more popular than Remicade infusions, Dr. Axel Finckh of the Geneva University Hospital said.

“You find a different trend in the U.S., where Remicade and other infusion therapies can be favored by the rheumatologists, who make money by administering these therapies in their offices,” he said.

The trial-and-error process of finding the right drug for individual patients may also underpin a multiple-drug strategy. “Within 1 1/2 years, half of patients will have switched,” Finckh said.

Rheumatologists are counting on biosimilars — near-copies of patent-expired, name-brand biologics that cannot be exactly replicated but demonstrate the same efficacy — to expand patient options.

In Germany, for instance, high costs have weighed on Humira, Enbrel and Remicade uptake, Dr. Stefan Schewe, a German Rheumatology League board member, said. Though price erosion has been unsatisfactory so far, he said, the arrival of more copies, in particular of Humira, should help.

As Sandoz’s Lynch talks up her expanding portfolio, Novartis is hawking its new billion-dollar seller Cosentyx as better than Enbrel in some arthritis indications.

Lynch downplayed the threat of internal competition between her unit’s drugs and Cosentyx.

“Anti-TNFs continue to be a cornerstone in the treatment of immune diseases,” Lynch said. “Having all the major products in the portfolio supports the (company’s) leadership position in immunology.”