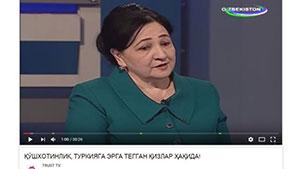 A crackdown on polygamy has led to an intense online debate in a former Soviet republic.

The most recent controversy in Uzbekistan kicked off after Dilbahor Yoqubova, an official in Uzbekistan’s justice ministry, accused “illiterate mullahs” of carrying out unofficial Muslim marriage rites.

Yoqubova made the comments on a popular TV talk show, and on the same broadcast professor Dilfuza Rahmatullayeva claimed that a resurgence in “religious freedom” has resulted in an increase in polygamy in the Muslim majority country.

The discussion caused a new outcry about polygamy in a country where the issue has been trending for quite some time.

One of the supporters of the women posted on the BBC Uzbek Facebook page: “In many rural districts of Tashkent region, those illiterate mullahs are causing young men to marry second wives. Since their marriages are not registered, they freely divorce and get married to another one under Sharia law.” The Facebook user said there were hundreds of thousands of unregistered marriages in the country of 32 million people.

But another commenter defended the practice and said that religious, rather than government officials, should be the primary authorities overseeing marriages: “The majority of workers at registry offices themselves have no families and are divorced. As they are so removed from religious education, why should these women guide imams?”

Some users insisted that Sharia, or Islamic religious law, permits the practice. “Is there any brave imam who will say that Sharia allows polygamy?” asked one YouTube user.

Polygamy has been a big topic of discussion in the country recently. In mid-June, President Shavkat Mirziyoyev said that the practice was leading to “undesirable consequences” and state-run media launched a campaign against it.

While polygamy is illegal in Uzbekistan, the traditional practice is defended by supporters of Islamic law. Critics, including women’s rights activists, say it’s an outdated practice and that supporters are simply using religious excuses to defend men who take multiple wives.

A new bill is being drawn up to bring mullahs and imams to account if they lead a nikah – religious marriage ceremony – which enables men to take more than one wife. But socially conservative elements in Uzbekistan have argued that the new law would lead to an increase in divorce and prostitution.

“This is not a disputable issue,” wrote one popular blogger, arguing that any Muslim who disputes polygamy will become “an infidel.”

But another popular blogger had a different take, writing: “Polygamy is a religious mask to lasciviousness”.

“It is better not to have a husband at all than to be a second,” said another critic of polygamy. “If women agree with polygamy, they shouldn’t be surprised if men walk all over them. People’s opinions vary, but as a woman I am categorically against polygamy.”

Despite the law against it, polygamy remains common. Many Uzbeks get married to other women abroad, leaving behind their first families in their homeland. Unofficial figures indicate there are more than 3 million Uzbeks working in Russia as migrant labourers.