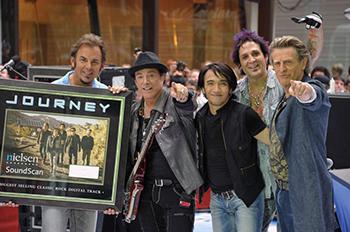 But tech investment is still rolling along in the rest of the country.
by Justin Fox
When the lights go down in the city …
Photographer: Mike Coppola/Getty Images
The second-quarter PricewaterhouseCoopers MoneyTree report on venture capital investment in the U.S. (based on data from CB Insights) came out last week, and it once again showed the San Francisco area in the lead:

Where the VC Money Is Going
Venture capital investment, first six months of 2017
Source: PricewaterhouseCoopers MoneyTree report
This leadership is a relatively new thing. Until 2010, the San Francisco area had, except for one quarter in 1999, always trailed Silicon Valley — the longtime headquarters of the U.S. tech industry just to its south — in the MoneyTree tallies of inbound VC investment, which go back to 1995. In fact, PwC had just counted the two as a single region called Silicon Valley until this year, when it decided to split the area along the dividing line of California Route 92 1 and redo all its historical data accordingly. That historical data shows San Francisco to have at times trailed even New York and/or New England (yes, the way PwC sorts VC investments by region is a little quirky). But in recent years, led by the unicorny likes of Uber, Airbnb, Pinterest and Dropbox, the city by the bay pulled ahead of the pack.
San Francisco Has Peaked
Venture capital investment, trailing 12 months
Source: PricewaterhouseCoopers MoneyTree report
Here’s another view of the same data, this time expressed as a percentage of total U.S. VC investment.
San Francisco Has Peaked (Another View)
Share of U.S. venture capital investment, trailing 12 months
Source: PricewaterhouseCoopers MoneyTree report
This is one of those cases where just gazing at charts might tell us something that a more sophisticated analysis would not. The charts tell us that San Francisco’s dominance of VC investment over the past five years was unprecedented (or at least, not seen since 1995) — and also that it is fading, fast.
Last year I wrote of San Francisco’s VC investment flood and New York’s smaller but also significant gains in VC market share as a bet on densely populated cities over Silicon Valley-style sprawl. 2 That probably wasn’t all wrong — I’m guessing that at least some of the south-to-north shift in the Bay Area’s center of startup gravity will endure. But the San Francisco VC boom is also increasingly looking like it might be something else: a bubble that has begun to deflate.
That’s not at all the case with the national numbers:
Forget About San Francisco for a Moment
Venture capital investment, trailing 12 months
Source: PricewaterhouseCoopers MoneyTree report
The dot-com-era VC boom and bust was a national phenomenon. In recent years, while San Francisco has experienced an even bigger VC boom than it did back then, the rest of the country has seen relatively modest gains and is still far from record territory. When you exclude San Francisco from the calculations, in fact, the recent downturn in VC investment looks like a minor interlude that may have already ended. Go outside the U.S., and there isn’t even a downturn. According to the MoneyTree report, VC investment in Asia surpassed that in the U.S. for the first time ever in the second quarter of 2017.

Or it could be something else. In any case, San Francisco’s recent VC experience has been strikingly different from that of just about everywhere else, and the 2014-2017 rise and fall of VC investment there looks alarmingly similar (if not quite as precipitous on the downside) to that of 1999-2001. Again, that’s just what the charts show — I don’t have a convincing substantive explanation for how San Francisco could go through a startup bubble and bust while VC investment in the rest of the nation and world chugs right along. But that does appear to be what’s happening.