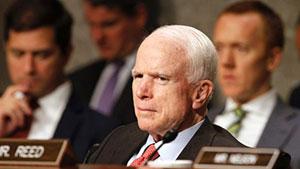 Washington: It’s a hell of a gamble when you rely on a sick man. But Senate leader Mitch McConnell had no choice when Arizona Senator John McCain was laid low on Friday, with a blood clot over his eye. McConnell was forced to cancel a Senate vote scheduled for this week on the Republicans’ increasingly unpopular makeover of Obamacare.

With two GOP senators committed to voting against the bill, the numbers are thought to be evenly divided – 50 for, 50 against. But there’s no guarantee that McCain, when he’s back on his feet, will support the bill.

McCain has only been critical of the terms of the makeover and the secretive process by which it was drafted. And his period of recuperation, initially thought to take a week, has been seized on by critics of the new healthcare laws, as an opportunity to browbeat an estimated eight or ten GOP senators who are said to be wobbling.

But McCain’s absence from Washington could be longer – perhaps two weeks or more.

Commenting on a description of the treatment released by the senator’s office – the removal of a five-centimetre blood clot from above his left eye during a “minimally invasive craniotomy with an eyebrow incision”, Nrupen Baxi, assistant professor of neurosurgery at the Albert Einstein College of Medicine, told The New York Times it was a “very concerning issue…the recovery time from a craniotomy is usually a few weeks”.

At various times in his career, McCain has been spoken his mind. He voted against George W Bush’s tax cuts; he went against GOP colleagues by supporting reducing greenhouse emissions and funding for a Barack Obama executive action that allowed some illegal immigrants to receive federal benefits; and he’s also been a vocal critic of torture as a tool in the US anti-terrorism arsenal.

If McCain returns to the Senate with his inner maverick to the fore, he could kill the bill, which would be a major embarrassment for the Republicans generally and for US President Donald Trump in particular.

The GOP has spent the best part of eight years hammering the Affordable Care Act – aka Obamacare. But with control of the White House, the House and the Senate, they have been mired in factional warfare over how to proceed – and every concession to conservatives has hardened moderate opposition, and vice versa.

The “repeal and replace” slogan of last year’s campaign was presumed to be a done deal in the heady aftermath of the election, but these days it hangs by a thread.

Republicans managed to scrape together enough votes to get it through the House and this latest postponement of a Senate vote is the second time that McConnell has pulled the bill as he stared at defeat.

The declared holdouts are Maine Senator Susan Collins, a moderate, who argues that the legislation is too hard; and Kentucky Senator Rand Paul, a conservative, who claims it’s not hard enough.

Interviewed on the Sunday talk shows, Collins declared: “There are about eight to ten Republican senators who have serious concerns about this bill, so at the end of the day, I don’t know whether it will pass.”

Paul was more emphatic, when asked on Fox News if McConnell had the numbers, he replied: “I don’t think right now he does”.

Despite the GOP’s success in marshalling massive voter opposition to Obamacare, the party has done the seemingly impossible by crafting a bill that has the dubious honour of being even more unpopular. One academic study ranks it as the most unpopular legislation to be put to Congress in 30 years.

Despite, or because of a determined Republican campaign to discredit a Congressional Budget Office report that estimates more than 20 million Americans would lose health cover under the party’s plan, respondents to a weekend poll for The Washington Post and ABC News voted 2-to-1, 50 per cent to 24 per cent – in favour of Obamacare over the GOP alternative.

The criticism focuses in particular on Republican plans for a return to what are called “junk” insurance policies – cheap because of their very limited cover and sky-high deductibles; and funding and coverage cuts to the associated Medicaid health program.

Trump and senior Republicans have argued that consumers would get greater choice and cheaper options. But in an unlikely alliance, consumer lobby groups and health insurers are predicting the GOP plan will split the market, as healthy, younger people opt for the cheap, low cover policies, while older people will be hit with soaring costs for more comprehensive policies.

The GOP plan “is simply unworkable in any form and would undermine protections for those with pre-existing medical conditions, increase premiums and lead to widespread terminations of coverage for people currently enrolled in the individual market,” the insurance industry’ lobbies America’s Health Insurance Plans and BlueCross BlueShield Association said in a letter to all senators on Friday.

Sure, lower premiums would be attractive to many, says consumer health policy expert Elizabeth Imholz, but she argued: “the reality for consumers is that they can be stuck with huge, unexpected out-of-pocket costs”.

The National Association of Insurance Commissioners, which represents state regulators, weighed in too, warning senators that the GOP plan “appears to block the ability of states to preserve important consumer protections, effectively oversee the plans, or ensure a level playing field”.

On Saturday night, the 80-year-old McCain said in a statement that after surgery at Mayo Clinic Hospital in Phoenix, he was staying home “on the advice of his doctors”.

Asked last month about the likelihood of a quick deal on the GOP, he told reporters: “pigs could fly”. And when the latest draft of the bill was released last week, he complained that there was no protection for people who were now becoming eligible for Medicaid benefits.

On the secret drafting of the bill, he said in a statement: “Have no doubt, Congress must replace Obamacare, which has hit Arizonans with some of the highest premium increases in the nation and left 14 of Arizona’s 15 counties with only one provider option on the exchanges this year.

“But if we are not able to reach a consensus, the Senate should return to regular order, hold hearings and receive input from senators of both parties, and produce a bill that finally provides Americans with access to affordable and quality health care.”

Paul saw the delayed vote as an opportunity.

“The longer the bill is out there, the more conservative Republicans are going to discover it is not repeal,” he told CBS, as he voiced the hardline GOP complaint that too much of Obamacare is being retained in the proposed new deal..

“I think it’s absolutely wrong,” he said. “It’s not at all consistent with Republican principles . . . . We promised repeal.”

Collins went the other way, telling CNN: “You can’t take more than $US700 billion [$894 billion) out of the Medicaid program and not think that it’s going to have some kind of effect.

“This bill imposes fundamental, sweeping changes in the Medicaid program, and those include very deep cuts that would affect some of the most vulnerable people in our society, including disabled children and poor seniors. It would affect our rural hospitals and our nursing homes, and they would have a very hard time even staying in existence.”