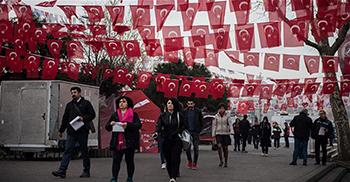 The non-agricultural unemployment rate was 12.4 percent with 1.4 point increase, according to data from the Turkish Statistics Institute (TÜİK).

The youth unemployment rate including persons aged 15-24 was 19.8 percent with 3.8 point increase in the April period.

The number of seasonally adjusted unemployed persons decreased by 60,000 to 3. 55 million persons in the period of April 2017 compared with the previous period, according to TÜİK data.

The seasonally-adjusted unemployment rate was 11.3 percent with 0.2 percentage point decrease.

The number of employed persons rose by 519,000 to 28.1 million in the period of April 2017 compared with the same period of the previous year.