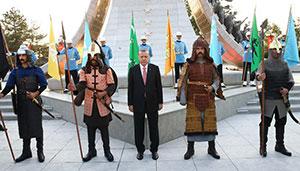 Following reactions to a remark made by President Recep Tayyip Erdoğan portraying the Turkish population as 50 million, the ruling Justice and Development Party (AKP) on Monday issued a correction, saying Erdoğan had inadvertently mentioned the figure.

“On the night of July 15 we buried 250 heroes, but in return saved the future of a Turkey of 50 million,” said Erdoğan while speaking to thousands of people at the July 15 Martyrs’ Bridge on the anniversary of a failed coup attempt last year.

Reacting to the statement, opposition parties took the issue to Parliament.

“Ignoring 30 million people in Turkey, which has a population of 80 million, means dividing the nation and is an open attack on the unity of the country,” said Republican People’s Party deputy Aytuğ Atıcı during a speech in Parliament, adding: “Is the 50 million the president mentioned a combination of the people who voted for the AKP and the Nationalist Movement Party [MHP], and their families?”

Responding to Atıcı, the AKP’s parliamentary group deputy chairman Naci Bostancı said: “The 50 million was inadvertently mentioned. There’s no need to look for something behind it.”

Erdoğan’s statements targeting other parties and their supporters have been the center of debate in recent years.

The Turkish president also declared the Gülen movement and people linked to it a terrorist organization.

Ahead of a referendum on April 16 on the switch to an executive presidency, Erdoğan as well as Prime Minister Binali Yıldırım accused the potential “no” voters in the referendum of taking sides with terrorist organizations.

Imams of mosques also participated in the government campaign. An imam in İstanbul’s Ümraniye district accused naysayers of “treason” and “ignorance,” while an imam leading a group of Turks during Umrah in Mecca labeled those in the “no” camp “infidels.”