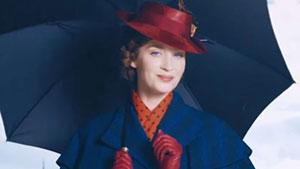 As thousands of Disney fans packed the exhibition hall at the Anaheim Convention Centre on the weekend, they were treated to a passing parade of Jedi knights, superheroes, teasers and tidbits from upcoming blockbusters.

But in that crowd at the D23 Expo – think of it as the Disney cousin to Comic-Con – one little woman stood head and shoulders above the lot of them: a British nanny named Mary Poppins.

On a day when billion-dollar budgets were supposed to rule the stage, the first glimpse of images from Disney’s Poppins sequel – Mary Poppins Returns – were met with the greatest applause, cheering and a standing ovation from the crowd.

If screams were worth box office dollars, the film would already be soaring past both Frozen and Beauty and the Beast.

And yet there was no trailer, just a rough cut of scenes and still images, accompanied by the Disney orchestra performing live, playing music from the new film’s soundtrack.

The film’s cinematographer is Australian Dion Beebe, whose credits include Chicago (2002), Memoirs of a Geisha (2005) and Into the Woods (2014).

The material included the first look at the main cast in character, as well as glimpses of the characters played by Meryl Streep, Lin-Manuel Miranda, Angela Lansbury and, in something of a return engagement, original Poppins star Dick Van Dyke.

It opens as the Banks family are dealing with a tragedy which leaves Michael’s three children Annabel, Georgie and John broken hearted.

On cue, the magical English nanny, who flies using her umbrella and the East wind, lands on the doorstep of 17 Cherry Tree Lane for a second time, bringing the family “a spoonful of sugar”.

In the original, the character was played by Dame Julie Andrews; Andrews will not appear in the sequel.

The sequel, like its predecessor, is based on the book series by Australian-born P.L. Travers.

The material presented at D23 revealed that Meryl Streep would play Mary Poppins’ cousin Topsy Poppins, a character featured in the book series but not in the original Mary Poppins film.

And Miranda will play a lamplighter whose part in the story seems to echo the part of the chimney sweep in the original.