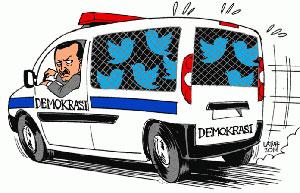 By TM
The Turkish Interior Ministry announced on Monday that 49 people have been detained over the past week on charges of disseminating propaganda on social media on behalf of the Gülen movement, the outlawed Kurdistan Workers’ Party (PKK) or the Islamic State in Iraq and the Levant (ISIL).

The ministry said investigations were launched into 517 social media users and that 49 of them were detained between July 10 and July 17.
The posts allegedly disseminated terrorist propaganda and praised terrorist organizations as well as provoking people to hatred, revenge and enmity and insulting state authorities.
Meanwhile, the ministry also said 1,366 people were detained in the past week in police operations against the Gülen movement, PKK and ISIL.
The Gülen movement is accused by the Turkish government of mounting a botched coup attempt on July 15, 2016. The movement strongly denies any involvement.