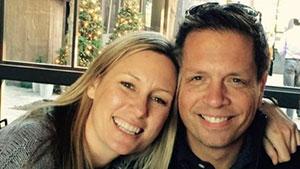 The “heartbroken” American fiancé of an Australian shot dead by a US police officer has said they have received almost no information from officials.

Don Damond said his wife-to-be, Justine Damond, was gunned down after calling police to report a possible sexual assault in their quiet neighbourhood.
He said they were “desperate” to find out how Saturday’s shooting in Minneapolis, Minnesota, happened.
The officers’ body cameras were not turned on at the time.
The shooting happened in a relatively affluent area, where violent crime is rare.
Mr Damond told a news conference outside his home on Monday evening: “Our hearts are broken and we are utterly devastated by the loss of Justine.
“As you know it was Justine who called 911 on Saturday evening, reporting what she believed was an active sexual assault occurring nearby.
“Sadly her family and I have been provided with almost no additional information from law enforcement regarding what happened after police arrived.”
Mr Damond continued: “Our lives are forever changed as a result of knowing her. She was so kind and so darn funny.”
Forty-year-old Ms Damond was living in Minneapolis with her fiancé, whose surname she had already adopted.
The Minneapolis Star-Tribune, citing three sources with knowledge of the incident, reported that Ms Damond was dressed in her pyjamas and approached the driver’s side door to talk to the officer at the wheel after police arrived.
The officer in the passenger seat, identified by local media as Mohamed Noor, drew his gun and shot Ms Damond through the driver’s window, the newspaper reported.
Mr Noor’s lawyer, Tom Plunkett, confirmed on Monday that his client had fired his weapon, killing Ms Damond.
Image copyright Minneapolis Police Department Image caption Mohamed Noor fired his gun and killed Ms Damond, his lawyer says
Ms Damond’s stepson, Zach, railed against police in a Facebook video.
“America sucks,” he said. “These cops need to get trained differently. I need to move out of here.”
The Department of Public Safety’s Bureau of Criminal Apprehension said an investigation is under way and authorities are looking into whether there is any video of the incident.
Minneapolis Police Chief Janee Harteau called Damond’s death “tragic” in a statement on Monday.
“I’ve asked for the investigation to be expedited to provide transparency and to answer as many questions as quickly as we can,” she said.
The two officers involved in the shooting are on paid administrative leave.
Minneapolis Mayor Betsy Hodges said she was “heartsick and deeply disturbed”.
She told a news conference: “I share the same questions other people have about why we don’t have body camera footage of it, and I hope to get answers to that in the days coming.”
Image copyright Justine Damond
Ms Damond, nee Justine Ruszczyk, taught meditation classes at the Lake Harriet Spiritual Community in Minneapolis.
She studied to be a veterinarian before relocating to the US, where she is believed to have been for at least the last three years.
According to her website, she is a “qualified yoga instructor, a personal health and life coach and meditation teacher”.
About 200 neighbours, family members and residents gathered for a vigil on Sunday night where she died.
Over the past few years the US has seen a series of civilian killings at the hands of police that have caused widespread concern and criticism.