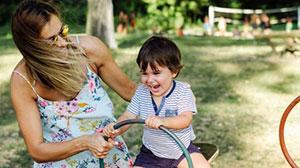 Looking after young kids is boring – we don’t say it enough.

Sitting on the rug with my 18-month-old son, I scoot another car through the explosion of toy debris. Making the obligatory ‘brrrmmmm’ sounds, I listen to his alien garbles in response.

I take a moment to stop, only to his displeasure. “More,” he says, pointing at the car. Off we go again. I’ve been here ten minutes and already I’m bored to tears.

I love my children unconditionally. Every parent does. But the relentless monotony of parenting regularly wears me down. Like a hamster on a wheel I struggle to embrace it.

My mind is immediately consumed with ways I can fill the day.

I cringe at the idea of germ-filled, acoustically-challenged playcentres. Singing The Wheels on the Bus at library rhyme time comes with real risk of me throwing myself under the moving returns trolley. And is there anything less relaxing than swimming with a toddler?

I go to the park and robotically push him on the swings. Other mums smile and nod in secret acknowledgement. Another day, another 12 hours. Occasionally I muster up the energy to have a chat, but when conversation turns to teeth, sleep times and development, my lights are on but no-one’s home.

There are many things about parenting that remain the best-kept secrets. No-one tells you that parenting involves being regularly thrown in the deep end and left to sink or swim. There’s no life raft or rubber ring to save you.

Neither does anyone tell you that parenting can be one of the most unrewarding and thankless jobs you’ve ever done. Sleep deprivation mixed with endless sickness and snotty noses, changing nappies and negotiating biscuit deals is mentally and emotionally draining.

However, there’s one truth that remains one of the biggest parenting taboos of all. The sheer, excruciating, knuckle-chomping boredom that accompanies day after day of looking after babies and toddlers.

Hours can feel like days and days can feel like months. Playing games holds little appeal when it’s longer than five minutes. Add in the frustration of the million inexplicable toddler rules to abide by and you have a recipe for pulling your hair out.

The Lego car must always maintain a certain speed in a certain direction. The Lego shop must only open at certain times. And, heaven forbid, if you so much as try to improvise with your own rules. Sigh.

The background music to your life becomes Igglepiggle, your education comes from PlaySchool, and your social etiquette slides as you follow in the path of Peppa.

So, why is it that we find it so hard to admit that parenting younger children is so mind-numbingly boring? Why do we have to pretend that it’s anything but?

I think we worry that if we don’t perceive parenting as fulfilling, we’re somehow a failure. We fear that admitting to boredom is a reflection on our love for our children. If we’re not enjoying it, we’re potentially unworthy. This thinking remains despite multiple blogs and online forums that tell us otherwise.

I admire those mums who revel in being with their children all day every day. We’re all different after all and there’s no right or wrong. But, for those of us who do get bored, know you’re not alone.

In fact, next time you’re at the park throw the ‘I’m bored’ comment out there at other mums. You may be surprised at the multiple echoes in response.