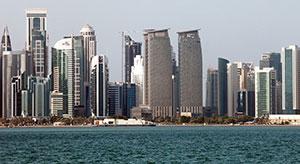 By Javier Blas
There’s little likelihood of a quick resolution to the Gulf standoff over Qatar as the emirate’s neighbors want a solution “that will stick,” according to a senior United Arab Emirates official.

Speaking during a trip to London, Minister of State for Foreign Affairs Anwar Gargash said the four-nation bloc led by Saudi Arabia that’s isolating Qatar needs a clear signal that the emirate is willing to reexamine its position regarding extremism and terrorism.
“The situation we want to move to is a neighbor that we can trust, a neighbor that is transparent, that we can do business with,” he said in an interview outside the Houses of Parliament. “This is not a crisis where we are looking for a quick fix,” he said. “We need a solution that will stick.”
The allies — Saudi Arabia, the U.A.E., Bahrain and Egypt — cut diplomatic and commercial ties with the emirate on June 5. They have vowed to restore them only after the world’s biggest producer of liquefied natural gas complies with their demands, including ending Turkey’s military presence, scaling back ties with Iran and severing relations with the Muslim Brotherhood. Qatar has rebuffed the demands and has denied the bloc’s allegation that it funds terrorism.
Gargash refused to give details of any further punitive measures being planned beyond saying that financial institutions and “people being harbored and supported by Qatar” might be targeted.
“We’ve said before that we are not going to escalate but we will take, here and there, measures that we need to take within our sovereign rights and within international law,” he said.
Tillerson Diplomacy
Diplomatic efforts to end the Saudi-led bloc’s isolation of Qatar have so far failed. After four days of shuttle diplomacy between Gulf capitals last week, U.S. Secretary of State Rex Tillerson said the dispute may last “quite a while.” The sides still refuse to speak to each other directly and are no closer to resolving the key demands made after the crisis started.
If anything, public positions are becoming more entrenched. Key Qatari ally Turkey on Monday said it was bulking up its military presence in Qatar, in defiance of the allies’ call for it to pull out. The development emerged hours after The Washington Post newspaper, citing unidentified U.S. intelligence officials, reported that the U.A.E. orchestrated the hacking of Qatari government websites in May to post pro-Iran comments that ultimately led to the feud. U.A.E. officials on Monday denied their country was involved.