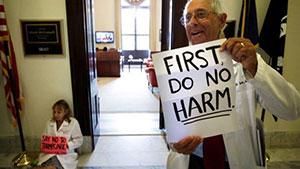 Mike Lee and Jerry Moran both announced they could not support the bill in its current form.
Republicans hold 52 seats in the 100-member Senate, and with two other Republicans already against the bill they could not afford more desertions.
President Donald Trump made repealing Obamacare a key campaign pledge.
The current plan retains key Obamacare taxes on the wealthy, while allowing insurers to offer less coverage and imposing sharp cuts to healthcare for the poor.
The two senators simultaneously announced their opposition to the planned reforms.
While saying there were “serious problems” with Obamacare, Mr Moran said “we should not put our stamp of approval on bad policy”.
Republican leaders and the White House were left with just a few options: try to rewrite the plan, engage in a bipartisan effort to address the flaws recognised by both parties or abandon it altogether and focus on other key issues, such as tax reform.
But Senate Majority Leader Mitch McConnell said he would try to pass a repeal of Obamacare with a two-year delay implementation that would provide a “stable transition period” to a new legislation.
Reacting to what is being seen as a significant setback, Mr Trump urged Republicans to repeal the “failing Obamacare now and work on a new healthcare plan” that would draw support from Democrats.
Democrats have said they will not co-operate to repeal Obamacare, but that they can work in a bipartisan way to improve it.
Senate Democratic Leader Charles Schumer said on Twitter: “This second failure of Trumpcare is proof positive that the core of this bill is unworkable.”
A similar version of the bill was approved by the House of Representatives in May, but analysts predicted a more turbulent process in the Senate, given the different positions.
Two other Republican senators, Rand Paul and Susan Collins, had already announced their opposition to the bill.
Congress has been delaying its summer holiday in a bid to overturn former President Barack Obama’s 2010 legislation.