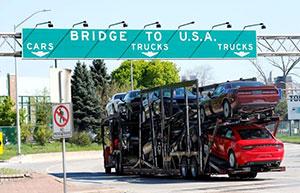 WASHINGTON (Reuters) – The United States on Monday launched the first salvo in the renegotiation of the 23-year-old North American Free Trade Agreement (NAFTA), saying its top priority for the talks was shrinking the U.S. trade deficit with Canada and Mexico.

In a much-anticipated document sent to lawmakers, U.S. Trade Representative Robert Lighthizer said he would seek to reduce the trade imbalance by improving access for U.S. goods exported to Canada and Mexico under the three-nation pact.
For the first time in a U.S. trade deal, the administration also said it wants an “appropriate” provision to deter currency manipulation by trading partners. The move appeared aimed at future trade deals rather than specifically at Canada and Mexico, which are not considered currency manipulators.
The 17-page document asserted that no country should manipulate its currency exchange rate to gain an unfair competitive advantage, an often-cited complaint about China in past years.
Shortly before the release of the document, President Donald Trump lashed out against trade deals and unfair trade practices, saying he would take more legal and regulatory steps during the next six months to protect American manufacturers.
Canadian Minister of Foreign Affairs Chrystia Freeland said the U.S. list was “part of its internal process,” although a source familiar with the Canadian government’s thinking said the document was “not earth shattering.”
Trade experts have argued that shrinking the yawning U.S. trade deficit will not be achieved by revising trade deals but rather by boosting U.S. savings.
“The first bullet point shows their preoccupation with bilateral trade deficits, and that’s unfortunate,” said Chad Bown, a senior fellow and trade expert at the Peterson Institute for International Economics. “There’s not much that trade policy and trade agreements can do to change those. That’s more of a macroeconomic issue.”
Among the priorities, Lighthizer said the administration would seek to eliminate a trade dispute mechanism that has largely prohibited the United States from pursuing anti-dumping and anti-subsidy cases against Canadian and Mexican firms.
There was no mention of active disputes between the United States and Canada over softwood lumber and dairy products, but the document targeted a range of agricultural non-tariff barriers, including subsidies and unfair pricing structures, that are currently at the heart of those standoffs.
USTR said it would seek to strengthen NAFTA’s rules of origin to ensure that the pact’s benefits do not go to outside countries and to “incentivize” the sourcing of U.S. goods. It offered no details on such incentives and did not specify how much of a product’s components must originate from NAFTA countries.
No date has been announced for the NAFTA talks, but they are expected in mid-August.
Automakers Support Stance
Matt Blunt, president of the American Automotive Policy Council, a group representing U.S. automakers, welcomed the decision to include in the list of objectives the removal of regulatory barriers and the provision on currency manipulation.
A spokesman for Ford Motor Co said: “Foreign currency manipulation is the 21st century trade barrier, and we strongly support the inclusion of this top-tier issue in the U.S. negotiating objectives for NAFTA.”
The document also outlined plans to upgrade standards for labor and the environment and govern digital trade. Canada and Mexico have already agreed to upgrade these areas as part of the defunct Trans-Pacific Partnership trade deal.
Representative Sander Levin, a Democrat from Michigan, said there was nothing in the document that would change the way Mexico treated its workers.
“Mexico has used their workers having no rights and suppressing labor costs as a key part of their industrial policy,” he said, “There is nothing in the summary that assures in these vital aspects that a new NAFTA will be different than the old.”
There was no formal reaction to the letter from Mexican government.
Earlier on Monday, AFL-CIO President Richard Trumka said NAFTA had been an “unequivocal failure” and should be completely renegotiated.
“We will do everything we can to make this a good agreement and to hold the president at his word and make sure we get a renegotiation,” the head of the 12.5-million-strong union umbrella group told a conference call with reporters.
“If it comes out that it is not a good deal, no deal is better than a bad deal,” Trumka said.
NAFTA has quadrupled trade among the three countries, surpassing $1 trillion in 2015, but the U.S. trade deficit with Mexico exceeded $63 billion last year.
(This version of the story corrects spelling of analyst name to Bown from Brown in paragraph 8)
Additional reporting by David Shepardson; Editing by Cynthia Osterman and Howard Goller