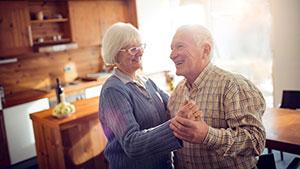 Brides
For some people, the scary thing about growing old with someone is the looming possibility that one day sex won’t be as amazing as it is now. And while it’s certainly natural for a couple’s sex life to slow down some as they get older, that doesn’t mean it has to get boring or less satisfying.

Recently, researchers from the University of Waterloo in Ontario published a study that aims to break down the stereotype that older people aren’t passionate in the bedroom. “Sexuality is an important part of human life across the life span,” Amy Estill, one of the authors, told CBC in a recent interview, “and it’s something that’s often not considered for older adults because there is a stigma around it.”
Estill and her co-authors tackled the topic by analyzing the data from a national survey collected over a 10-year period. For their purposes, they focused on the questionnaire responses of 1,170 adults over the age of 40. In addition to comparing demographic variables (such as gender, household income, employment status, and marital status), they also factored in chronic health conditions and self-rated physical health. Finally, they took stock of participants’ aging attitudes and their subjective age (the difference between actual age and the age they feel), as well as frequency, quality, and interest in sex.
On average, the study’s authors found, participants reported a drop in frequency, quality and interest in sex over time. But researchers also confirmed that “positive aging attitudes predicted increased ratings for quality of sex.” In short, feeling younger than you really are may not equate to lots of romp time, but it may mean your bedroom activities won’t disappoint.
“This suggests that the stereotypes that we hold about aging in our society can have a very real impact on sex in later life and how we view it,” Estill explains.
Interestingly, researchers also found that people who engaged in sex more frequently earlier in life have more frequent sex 10 years later. While a number of factors could have impacted this outcome, such as age or health, it’s still worth keeping in mind — especially if you’re of the mindset that you can never have too much of a good thing.
For a soon-to-be married or newly wedded couple, Estill offers this takeaway from her study: “If you feel good about getting older, and if you feel younger than you are when you do get older, you’re more likely to have better quality sex later in life. Having a positive attitude about aging and feeling young at heart can have a real impact in the bedroom as you age.”