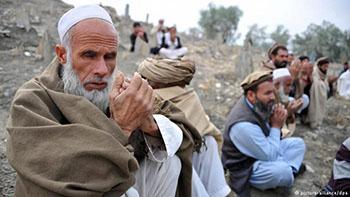 According to a new UN report, Afghanistan’s protracted war killed a record number of 1,662 civilians in the first six months of this year. DW spoke to Dr. Sima Samar, chairperson of the Afghan Human Rights Commission.
DW: How is the current security situation in Afghanistan?

Sima Samar: Unfortunately, the security situation in Afghanistan is deteriorating. One of the reasons in my view is the premature withdrawal of international security forces due to a lack of a long term comprehensive strategy for the country. A united approach by the different countries involved in military activities and reconstruction efforts was lacking right from the start.
State institutions should be responsive to the needs of the people. Good governance and rule of law was not supported enough by the international community to gain the trust of the people. But it is public support for state institutions that isolates the opposing groups. The Afghan people are the key to helping improve the security situation.
The overall intervention after the September 11 attacks was not based on human rights principles or the protection of human dignity. The lack of provision of justice and the discrimination based on ethnicity, religion, sex and language has continued over the years. When discrimination continues, conflict continues. It might take a different shape, but the wound will continue to bleed.
Peace is not the end of war. Peace is human security. Peace is justice and freedom to live with dignity.
Who is responsible for the escalation of violence?
The escalation of violence has a regional and international component and is partially rooted in the environment in Afghanistan. There is conflict between the country’s strongmen that are involved in the power game.
Regional and international players exploit the vulnerabilities of the Afghan people. There is poverty. There is a lack of job opportunities, good governance and functional responsive institutions. All of this puts people in survival mode. They don’t feel that they will be protected by the government if they stand against the armed opposition.
The Taliban have gathered strength since their regime was overthrown in 2001. Government on the other hand has lost control over a lot of territory although its forces outnumber Taliban fighters. How is this possible?
I don’t think the Taliban are getting stronger by the day. They can act without any respect to international humanitarian law. They can act without any fear of accountability, with full impunity.
We need to find the root causes for their behavior. Who are the countries supporting them and why? I believe that the world knows who supports the Taliban. But no strong and united action has been taken against those countries that are the factories for the production of terrorists in the region and in the world.
The other reason, of course, is that we could not promote good governance and rule of law in Afghanistan. Without public support you cannot isolate the spoilers. The civilian public does not believe in the future. That is why the Afghans are the second biggest group of refugees in Europe.
We are talking about America’s longest war. Where did this intervention go wrong?
I believe that one of the problems is the lack of a deep assessment of their past years in Afghanistan. There is no will to try and fix the mistakes and weaknesses of the past. The second problem is that they are not in contact with the people. Their points of contact are the people in the government or the warlords.
No new strategy has been announced, yet, but it seems clear that the US and NATO will again send more troops to support the Afghan security forces – a turning point for the better?
This war cannot be won with bombs. It can be won by winning public support through the promotion of accountability and justice.
Corruption is another factor for the growing distance between the people and state institutions. And so is the friendship of the international community with corrupt warlords.
What needs to happen short term to at least stabilize Afghanistan?
The Afghan national security forces require training, mentoring and equipment. Plus, close monitoring of their activities – not based on friendships, but based on good performance. For that we need the help of the international forces.
How realistic is an Afghan-led and Afghan-owned peace process?
The immediate urgency for the Afghan government is to strengthen peace and reconciliation with the people who are not part of the armed opposition. A united, inclusive approach of the current government towards the enemy will show better results.
All efforts for an Afghan-led or internationally-led peace process have not been able to reduce violence. Despite spending a lot of money over the past decade, with talks about talks, we still need to find the actual enemy to talk with.
The blame game which is going on in our region and the denial of existing problems will not help the peace process – no matter if it is Afghan-led or led by any other country.
I support negotiations, because war kills our people and destroys the little property we have. But peace that oppresses my human rights and limits my freedom is not peace. It is a short-term political deal. We keep repeating this mistake.
Peace must be inclusive. There must be accountability and justice. The recent example of Colombia is a better approach. It is a good example to learn from and to build on.
I insist that we need a strong political will and strong institutions to implement any peace agreement and to keep it in place.
Samar was the first minister of Women’s Affairs in Afghanistan, from December 2001 to June 2002. She is currently the chairperson of the Afghan Independent Human Rights Commission (AIHRC) and was awarded a 2012 Right Livelihood Award, also known as the Alternative Nobel Prize.
Mattis: The US is ‘not winning’ in Afghanistan
DW recommends