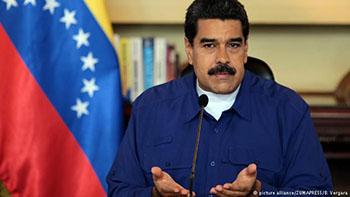 The Trump administration is “considering all options,” including banning Venezuelan oil imports, officials said. The US is trying to pressure President Nicolas Maduro to abandon plans to rewrite the constitution.
The White House is working with other countries to prepare “robust” economic sanctions against the government of Venezuelan President Nicolas Maduro, senior US officials said Tuesday.

When asked about possible measures targeting Venezuela’s oil sector, an official who spoke on condition of anonymity told reporters: “All options are on the table, all options are being debated.”
The official did not specify what the sanctions would be, but stressed that any decisions would take the potential impact on American jobs and the economy into account.
“We understand that we’re working with options that will have consequences not just in Venezuela, but also in the United States,” the official said.
Dreams of a ‘dictator’
Venezuela’s government, meanwhile, vowed to go ahead with its plan for a July 30 vote to elect a controversial assembly that would have the power to rewrite the country’s constitution, despite international condemnation.
“Nothing and nobody can stop it. The Constituent Assembly is happening,” Foreign Minister Samuel Moncada told a news conference on Tuesday, adding that Venezuela is “conducting a deep review of relations with the US government because we don’t accept humiliation from anyone.”
The defiant remarks came a day after US President Donald Trump called Maduro a “bad leader who dreams of becoming a dictator,” and threatened “strong and swift economic actions” if the election was held.
Officials quoted by the Reuters news agency on Tuesday said Trump’s administration was drafting possible sanctions against Defense Minister Vladimir Padrino Lopez and Socialist Party deputy leader Diosdado Cabello for alleged rights violations. Another source said the measures could be announced within the next few days.
Maduro blasts US sanctions threats
Country in crisis
The US has already imposed travel bans and frozen the assets of high-ranking Venezuelan officials in recent weeks, but it has steered clear of broader sanctions that could compound the country’s economic crisis.
Venezuela is suffering a deep recession that has led to severe food and medicine shortages and months of anti-government protests. The opposition, which blames Maduro for the situation, is demanding fresh democratic elections.
Any sanctions on Venezuelan oil could worsen the crisis and bankrupt Maduro’s government. The country, which is almost entirely reliant on its oil exports for revenues, currently ships a third of its crude oil – about 780,000 barrels per day – to the United States.
Over the weekend, the opposition held an unofficial referendum, which they say resulted in more than 7.5 million people voting against Maduro’s planned Constituent Assembly. They also called a 24-hour nationwide strike for Thursday as part of a “final offensive” to push Maduro out of office.
The president, however, insists that having the Constituent Assembly rewrite the constitution is the only way to restore peace and economic stability.
nm/bk (Reuters, EFE, dpa, AFP)