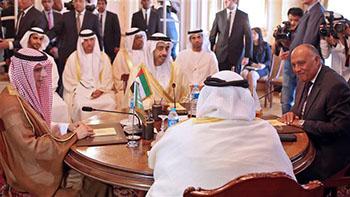 The Saudi-led bloc of countries, which have blockaded Qatar, have called on Doha to accept what they view as “principles” in their list of demands from Qatar, apparently backing down from a number of the terms on the 13-point list.
Saudi Arabia’s United Nations Ambassador Abdallah al-Mouallimi said during a briefing for a group of UN correspondents on Tuesday that the quartet is committed to the six principles agreed at a meeting in Cairo on July 5, The Associated Press reported.

He expressed hope that Qatar would also support the six “essential” demands.
The quartet comprising Saudi Arabia, Egypt, the United Arab Emirates and Bahrain severed diplomatic ties and cut all land, sea, and air routes with Qatar on June 5, accusing it of supporting terrorism — allegations denied by Doha.
They later issued the 13-point list of demands for Doha to meet in order for the relations to be restored. Among them was that Qatar end its support for Egypt’s biggest banned opposition party Muslim Brotherhood, close down a Turkish military base on its soil, limit its ties with Iran and “compensate” the sanctioning countries for unspecified harm.
The Saudi ambassador further said the initial 13 points comprised some principles and some tools to achieve compliance.
Mouallimi went on to explain that an end to incitement to violence is essential, but he said closing Al down Jazeera might not be necessary.
“If the only way to achieve that is by closing down Al Jazeera, fine,” he said. “If we can achieve that without closing down Al Jazeera, that’s also fine. The important thing is the objective and the principle involved.”
Qatar has dismissed the 13-point list, saying the points on the list are mere tall orders, and that it will not engage in any crisis resolution talks unless the siege is lifted.
‘Terror’ bone of contention
The principles include commitments to combating “extremism and terrorism,” preventing financing and creation of safe havens for “such groups,” and suspend all acts of provocation and speeches that may incite hatred or violence, AP reported.
Mouallimi stressed that implementation and monitoring must be “essential components,” and “there will be no compromise when it comes to principles.”
Meanwhile, UAE Minister of State for International Cooperation Reem al-Hashimy said Qatar had further escalated the situation by encouraging Turkey’s military presence.
UAE Ambassador Lana Nusseibeh also said that “if Qatar is unwilling to accept core principles around what defines terrorism or extremism in our region, it will be very difficult” for it to remain in the [Persian] Gulf Cooperation Council (GCC) with Saudi Arabia, the UAE and Bahrain.
“So it may be a parting of ways for a little while in order to work things out,” she said.
Turkey recently approved of sending more troops to its Qatar-based outpost, and started dispatching some of the troops with Doha’s approval.
Qatar’s Defense Minister Khalid bin Mohammad Al Attiyah gave an exclusive interview with Turkey’s TRT World network on Tuesday, saying no one could ask Doha to close down the Turkish base. “This is considered relation between two sovereign countries,” al-Attiyah said.
Mouallimi stressed that Qatar’s future lies with its neighbors not with “faraway places,” a clear reference to Turkey and Iran, which are supporting Doha.
Iran and Turkey have been shipping food supplies to Qatar amid the boycott. The two, however, have also been encouraging dialog to end the dispute.
Qatar mulls legal action
In another development on Wednesday, Qatar said it was considering taking legal action against the Saudi-led bloc.
Qatar’s Economy Ministry said the country had contracted a specialized legal team to study the actions taken by the blockading countries against it, Al Jazeera reported.
The potential proceedings would feature the emirate seeking reparations from the foursome for the damages caused by the siege.
Ahmed bin Jassim Al Thani, Qatar’s economy minister, met on Tuesday with the heads of international trade organizations in Geneva to discuss the case for compensation, the report added.
The Qatari defense chief had also hinted during the TRT World interview that Doha could refer to the International Court of Justice to seek restitution for the blockade’s adverse consequences.
Ali Sharif al-Emadi, the Qatari finance minister, told The Times recently that the state’s huge financial reserves, built on the sales of natural gas over decades, meant it could withstand sanctions.