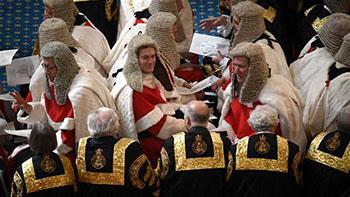 Britain’s exit from the European Union will have “profound and unpredictable” consequences for the country, a House of Lords panel has warned.
“Brexit’s impact on the future of the United Kingdom will be profound and unpredictable. At the moment, the internal politics are pretty toxic,” said Michael Jay, a member of the Lords EU committee and former head of the Diplomatic Service.

Last year’s referendum to leave the EU has highlighted tensions among four constituent nations of the UK. While England and Wales voted to leave the bloc, Scotland and Northern Ireland opted to remain.
Brexit has prompted fresh calls from Scottish nationalists for a second independence referendum, and members of the Scottish, Welsh and Northern Irish governments have complained that Prime Minister Theresa May has not involved them enough in its Brexit negotiation preparations.
The House of Lords European Union Committee’s report said the future of the UK is at risk as Brexit seeks to remove EU law that has helped bind it together.
“Brexit thus presents fundamental constitutional challenges to the United Kingdom as a whole,” the report said.
The lawmakers also urged the national government to set aside party politics and adjust its Brexit policy to accommodate the needs of the devolved governments.
“The balance of powers between the central government in London and the administrations in Edinburgh, Cardiff and Belfast “should be as far as possible unchanged” after Brexit, the panel warned.
“The UK government must respect the devolved institutions,” Jay said. “It’s not enough saying it’s listening to them; it’s actually got to take account of what they say and adjust its approach to accommodate their specific needs.”
The prime minister’s Brexit approach runs the risk of triggering a constitutional crisis as the Scottish and Welsh governments have rejected legislation to transpose all EU laws into British statute.
In a joint statement, Scottish First Minister Nicola Sturgeon and her Welsh counterpart, Carwyn Jones, denounced the bill as “a naked power-grab” after it was introduced in parliament by Brexit Secretary David Davis last week.
“Brexit will be a major constitutional change for the United Kingdom, and thus potentially a source of instability,” the Lords panel said. “Any attempt to use Brexit to make a power grab, either to ‘re-reserve’ powers previously devolved, or to claim more devolved powers, could compound such instability: This is not the time to embark on controversial amendments to the devolution settlements.”
While the report was prepared before the Brexit legislation was unveiled, its findings strike a chord with concerns of the devolved governments.