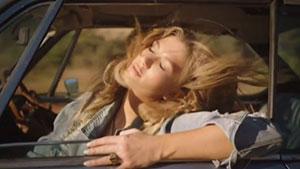 An Apple Music ad featuring singer and The Voice judge Delta Goodrem has been criticised by the Advertising Standards Bureau for promoting “unsafe” driving.

The ad, broadcast during The Voice’s finale on Nine earlier this month, had sparked complaints from viewers who noted Goodrem was “not wearing a seatbelt”, dangerously sticking her head and arms out of a moving car, and distracting the driver by waving around her mobile phone and dancing.

According to the ASB’s report, viewers called the ad “irresponsible” and said it “does not promote safe driving”.

“Delta Goodrem is not wearing a seatbelt while traveling in a moving vehicle on the road. This is setting a terrible example to young drivers and passengers at a time when statistics show us how at risk this age group is on the road,” said one complaint.

“As a young woman who is a role model, this sets a bad example and is illegal,” said another.

The ad – part of a series of clips promoting Apple Music on Telstra devices, featuring Goodrem singing along to various hit songs, including, cringingly, Kendrick Lamar’s Humble – had been defended by Apple, who said Goodrem and the car’s driver were wearing “lap seatbelts” at the time of shooting.

But after a review, the watchdog said the commercial breached “Prevailing Community Standards on health and safety around travelling in motor vehicles”, and forced broadcasters, including Foxtel, to stop airing the clip until it has been edited by Apple.

The company said it was “disappointed” with the Bureau’s decision, as it “takes health and safety very seriously”, but would comply with edits to the ad, which include inserting disclaimers making it “abundantly clear that the driver and passenger are both wearing seatbelts”.

Awkwardly for Goodrem, the controversy comes just weeks after the singer had her driver’s licence suspended following speeding offences.