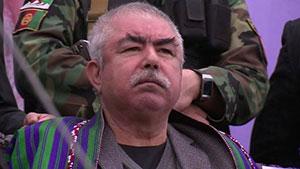 Afghan Vice-President Abdul Rashid Dostum tried to fly back from Turkey late on Monday but was denied permission to land, officials say.
It is unclear who stopped the landing but a source close to President Ashraf Ghani told the BBC the return had not been co-ordinated with the government.

Gen Dostum left for Turkey in May amid claims he ordered his men to kidnap, beat and rape a political rival.
He denies wrongdoing. His spokesman said he went for a medical check-up.
Atta Mohammad Noor, the powerful governor of northern Balkh province, was waiting at Mazar-e Sharif airport to meet Gen Dostum on Monday night, the Pajhwok news agency reported.
More than 1,000 people accompanied the governor to receive the former warlord at the airport, which is near his home province of Jowzjan.
Witnesses said some Dostum supporters held posters with slogans such as “Welcome back our dear leader,” Reuters news agency reported.
But the plane was diverted to Ashgabat in Turkmenistan.
Early reports suggested German forces were behind the move. However, Nato later denied this, saying such decisions were a matter for the Afghan authorities.
A source close to President Ghani told the BBC’s Afghan service that Gen Dostum’s decision to return without consulting the authorities in Kabul had caused suspicion.
“We wanted him to come to Kabul… because we wanted to have a clear understanding of what’s going on,” the source said.
“There are no legal hurdles for him to return, the government has no issues, but he has to take the right route.”
Gen Dostum, Atta Mohammad and Mohammad Mohaqeq, another influential ethnic leader, recently formed an opposition group calling for major political reforms. They want to trim the powers of the president, whom they accuse of accumulating power.
Gen Dostum’s officials have denied he was on the plane that was turned away.
But one of the men tasked with preparing for his return confirmed to the BBC that Gen Dostum had spoken with his men from Ankara on Monday morning. He had directed them to co-ordinate with Atta Mohammad and Mohammad Mohaqeq and to organise a major event to launch the new coalition.
The vice-president is a former warlord with decades of experience in Afghanistan’s turbulent political arena.
He has been blamed for some of the worst atrocities in the country’s long-running civil war, but joined its national unity government in 2014.
The allegations against him come from Ahmad Eshchi, a former ally, who says he suffered days of severe beatings and sexual abuse at Gen Dostum’s command.
He said the vice-president and 10 other men assaulted him while he was forcibly kept at Gen Dostum’s residence in November 2016.
The ex-warlord denies the claims and has said that Mr Eshchi was detained by the country’s intelligence service.
In 2008 Gen Dostum went to Turkey amid similar allegations that his personal militia had abducted, beaten and sexually assaulted a political rival in Kabul, then fired on police who responded to the incident.