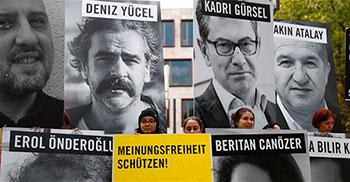 The broadcaster based its report on an interview the newspaper Die Welt conducted with the German Justice Minister and the Chancellery Minister.

Yücel, who holds both German and Turkish citizenship, was arrested on Feb. 27 on charges of propaganda in support of a terrorist organization and inciting public violence, after first being detained on Feb. 14.

Yücel, a journalist for the German newspaper Die Welt, faces up to 10.5 years in jail if convicted.

German Chancellery head Peter Altmaier said in an interview with Die Welt that Turkish prosecutors had still not prepared an indictment over Yücel’s charges. As such a handling of the case is against the principles of a state of law, the German federal government will support the complaint filed to the ECHR by the lawyer of Deniz Yücel, Altmaier said.

German Justice Minister Heiko Maas told die Welt that Germany will not leave any legal procedure untried in the case of Yücel. This is why the German government will also present a declaration before the ECHR and put its position very clear, Maas said.

Maas also called on the Turkish judiciary to present an indictment to them in the Yücel case, which lists the allegations against the journalist. So far, the German officials have only heard allegations that try “to defame Yücel as a terrorist,” Maas told Die Welt.

Maas also noted that Yücel’s solitary confinement should be lifted, as the first step in the rule of law was to provide “humane imprisonment conditions.”