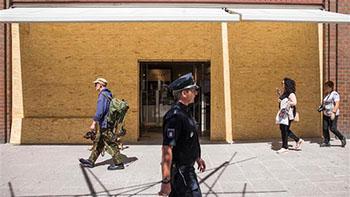 The cost of the damages caused by riots during the recent G20 summit in the German city of Hamburg would come in at about 12 million euros, according to a German insurance group.
The German Insurance Association (GDV) said on Tuesday that the total property damage during three nights of protests would add up to about 12 million euros — $4.6 million of which was attributable to damaged cars alone.

Protesters clashed with security forces in the streets of Hamburg as leaders of the world’s biggest economic powers met on July 7-8.
Demonstrations began even before the leaders arrived in Hamburg. Tens of thousands of people came together under the motto of ‘solidarity without borders instead of G20’ and marked the largest protests against the group ever.
About 100,000 people filled the streets, and tens of thousands of police officers were mobilized to keep watch.
Most of the protests staged on the first day of the summit were peaceful, but violence erupted between police and people on the next two days.
The escalating violence prompted police to call in reinforcements from around the country.
Both police and protest organizers blame the other for the violence.
A number of police officers were injured, and Chancellor Angela Merkel condemned the violence, saying there was no justification for the brutal attacks on police.
She has also promised to work with authorities in Hamburg to help people affected by the rioting.
It is said that the federal and city governments have set up a “hardship fund” for those whose properties were damaged during the protests.