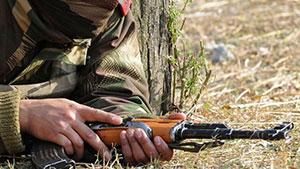 A young Indian soldier has shot dead a commanding officer in Indian-administered Kashmir after an altercation, the army has confirmed.
The army has not given further details. However, some junior officers told the BBC that the argument was over a mobile phone.

Media reports say the soldier was told off for using a phone while on duty, and the device was confiscated.
Officials told the BBC that police and the army were investigating further.
The incident comes amid concerns about morale in the armed forces.
Earlier this year, India ordered an investigation after a soldier’s video complaining about the quality of food went viral.
The army also came under fire for tying a man to the front of an army vehicle and using him as a human shield during polling in Indian-administered Kashmir.
The officer in charge at the time was later rewarded, which some analysts saw as a move to boost flagging morale among troops there.
Indian army sources have told the BBC that morale among soldiers stationed in the Kashmir valley is very low. Many soldiers are becoming increasingly uncomfortable with their role in the region, saying they fear they are effectively becoming an army of occupation.
Kashmir is disputed between India and Pakistan and Indian-administered Kashmir has seen a fresh upsurge of violence in the past few months.