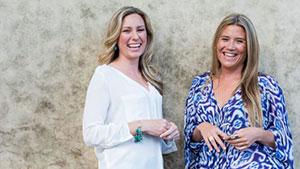 Justine Ruszczyk had me at hello. I crowded into a former church hall in Mosman one Sunday morning in March 2015 for a Manifesting and Mindfulness workshop she was running.

I’d been to these sorts of things before, fascinated by the whole spectrum of human potential and how to be more present in my own life. But this was something else.

“What we know now is that our brains are plastic,” Justine exclaimed, eyes wide with excitement. “Isn’t that the best news! It means our brains can change with every thought we think. We can literally create a new brain.”

There was a whiteboard that Justine scribbled on with great gusto, leaping about in skinny jeans and bare feet explaining the “new science” of neuroscience, quantum physics and epigenetics in such clear and palatable detail that it was impossible not to pay attention. This wasn’t some vague, nebulous hypothesis for the disillusioned to pin their hopes on. This was cold hard science presented by someone who knew her stuff.

Justine, she told us as the day wore on, was a trained veterinary surgeon. But, as much as she loved animals, she didn’t practice any more as she felt called to heal people instead.

She became a yoga and meditation teacher and channelled her scientific knowledge and acumen to be trained and mentored by renowned neuroscientist, Dr Joe Dispenza (he of The Secret fame), and made her living by teaching the principles of changing your life by changing your brain, with meditation as a non-negotiable. She had clearly found her forte.

“We grew up thinking life is happening around us and we had to try to survive,” she said. “But this idea of quantum physics and infinite potential and unlimited possibility is a much more empowering way to look at it. Anything you place your attention on has the opportunity of coming into reality.”

It had certainly worked that way for Justine. She shared with us (she couldn’t help herself) that she was moving to the US to live with her fiance, Don, with whom she’d fallen in love after writing a list of the attributes of her ideal man – it turned out he had been right under her nose all along.

Her “friend” – whom she’d first met at a Joe Dispenza workshop – she had realised, was much more than that. She instructed us all, right there and then, to write our own lists. Not necessarily of ideal men (although some women did just that), but of what we really wanted our lives to look like. This was a manifesting workshop, after all. Manifesting our desires via changing the neural pathways of our brain and, as she put it, “moving through blocks of fear”.

“Fall in love with yourself,” she gushed in her blissful timbre to a room full of (mostly) women. “Imagine what your life could be like when you’re aligned with your purpose.”

A few nights later I was invited to drinks by our mutual friend, Eloise King, the founder of Soul Sessions (now Souluversity), for whom Justine was the principal mentor. She asked me about me. She was like that, Justine. Insatiably curious about other people’s stories.

I told her about a big decision I was struggling to make, an area of my life where I was hopelessly stuck. “Pick a date,” she said to me. “Whatever date first comes to mind. That’s your decision deadline.” With that, she playfully reached across the table and grabbed my phone to enter said date into my calendar so I wouldn’t forget.

“You watch. Things will start to unfold to make it happen,” she smiled. “We all deserve to be moving forward.”

Funny, but I forgot all about Justine’s “deadline” until I heard the incomprehensible and utterly tragic news that she had died. That beautiful soul, a beacon of love and light and goodness, had been shot at close range by a cop after she called 911 to investigate a disturbance in her and Don’s Minneapolis neighbourhood.

My hands shook with disbelief. Maybe it wasn’t the same Justine. She had since taken her fiance’s name (they were due to marry in a matter of weeks) so I couldn’t be sure.

Then I saw her face across every news website. Those kind, piercing eyes, her wide, warm smile. Her beguiling beauty. Unmistakably Justine. And suddenly, nothing at all made sense.

Justine was big on everything happening for a reason. She had spoken that Sunday morning of her spiral into depression in her 20s, which eventually triggered her to change the course of her own life and led to her neuroscience awakening. Without darkness there could be no light.

People like this don’t just die for no reason whatsoever. Not people who preach about life purpose. What purpose would there be in this? What good can possibly come of it?

“I know what it’s like to change from the nine to five, Monday to Friday thing to live a life of purpose,” Justine told Eloise King in an on-camera interview for Souluversity. “It takes courage, you know.”

In her too-short life, Justine Damond helped change the trajectory of my life, and goodness knows how many others. The only thing we can hope for from her senseless death is that we will live more fully the way she prescribed. That we will live a life of purpose.