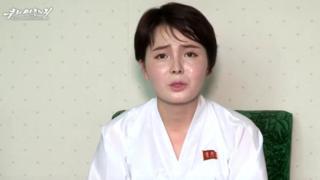 South Korean intelligence officials are investigating whether a prominent defector from the North has been kidnapped back to Pyongyang.
The woman, known as Lim Ji-hyun, fled to South Korea in 2014, where she became a popular TV personality.

However, a woman resembling her appeared in a propaganda video in the North’s capital on Sunday – prompting speculation she may have been abducted.
In the video, she says she was lured away and forced to slander the North.
She says that she voluntarily returned across the border.
Ms Lim had been a popular face on South Korean television, appearing on both talk shows and reality TV programmes.
The authorities have not yet confirmed if the woman in the propaganda video is Ms Lim. However, they believe Ms Lim is back in North Korea.
The propaganda video was released on Youtube by the North Korean Uriminzokkiri website on Sunday.
In the video, the woman introduces herself by another name, Jeon Hye-Sung.
She is shown in conversation with an interviewer and Kim Man-bok, another former defector who also returned to the North.
She says she was lured to the South by the “fantasy” that she could “eat well and make lots of money” and claims that she was forced into slandering her own country.
She describes how in the South everything was judged by money, how she was struggling to make ends meet and was asked to discredit the North on several TV shows.
She said she was now living back with her parents again after returning to the North last month.
“I felt really lonely in South Korea and I missed my parents,” she said in the video.
JoongAng Ilbo newspaper reports that the defector had thanked her fans as recently as April for a birthday party, calling it “possibly the happiest birthday of my life”.
Her fan club announced on Sunday it would shut.
Intelligence officials are investigating how Ms Lim might have re-entered North Korea.
Some North Korean defectors have speculated that she may have been abducted on the China-North Korean border while attempting to smuggle out family members, the Korea Times reports.
The BBC’s Karen Allen in Seoul says that fake propaganda videos do circulate in North Korea but the authorities in Seoul have confirmed they are taking this seriously and are investigating her case.
Over the past decade, tens of thousands of North Koreans have defected from the authoritarian state into South Korea.
The unification ministry in Seoul told the BBC that since 2012 only 25 returned.
Some North Korean defectors have described difficulties in adapting to life in the South – many miss their families in the North, or struggle to find suitable jobs.