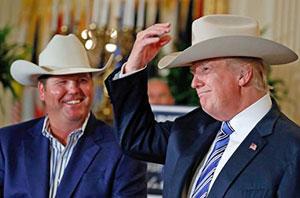 US President Donald Trump has attacked congressional Democrats and “a few Republicans” over the collapse of the Republican Party’s effort to rewrite the Obama health care law, and warned: “We will return.”

Mr Trump’s early morning tweet led a barrage of Republican criticism of Congress over the party’s failure on its flagship legislative priority. For seven years, the party has pledged to repeal former president Barack Obama’s law.

“Most Republicans were loyal, terrific & worked really hard,” Mr Trump tweeted yesterday morning. “We were let down by all of the Democrats and a few Republicans.

“As I have always said, let Obamacare fail and then come together and do a great healthcare plan. Stay tuned.”

Two Republican senators – Utah’s Mike Lee and Jerry Moran of Kansas – sealed the measure’s doom when they announced they would vote “no” in an initial, critical vote that had been expected as soon as next week. That meant that at least four of the 52 Republican senators were ready to block the measure – two more than Majority Leader Mitch McConnell had to spare in the face of unanimous Democratic opposition.

On the Senate floor, Mr McConnell conceded the legislation repealing the 2010 law and replacing it with Republican-preferred programmes “will not be successful”, essentially waving a white flag.

He said instead the Senate would vote on legislation dismantling much of Mr Obama’s statute that would take effect in two years, which Republicans say would give Congress time to approve replacement legislation.

However, such legislation seems unlikely to be approved, with many Republicans concerned the two-year gap would upset insurance markets and produce a political backlash against the Republicans.

“This doesn’t have to be the end of the story,” Mr McConnell said.

At the White House, Mr Trump appeared to recognise defeat, at least for the moment, while insisting he bore none of the blame.

The retreat was the second stinging setback on the issue in three weeks for Mr McConnell, whose reputation as a legislative mastermind has been marred as he’s failed to unite his chamber’s Republicans behind a health overhaul package that highlighted jagged divides between conservatives and moderates. In late June, he abandoned an initial package after he lacked enough Republican support.

Mr McConnell’s failed bill would have left 22 million uninsured by 2026, according to the nonpartisan Congressional Budget Office, a number that many Republicans found unpalatable. But the vetoed 2015 measure would be even worse, the budget office said last January, producing 32 million additional uninsured people by 2026 – figures that seemed likely to drive a stake into that bill’s prospects for passing Congress.

That would seem to leave Mr McConnell with an option he described last month – negotiating with Senate Minority Leader Chuck Schumer. That would probably be on a narrower package aimed more at keeping insurers in difficult marketplaces.

“The core of this bill is unworkable,” Mr Schumer said in a statement. He said Republicans “should start from scratch and work with Democrats on a bill that lowers premiums, provides long-term stability to the markets and improves our health care system”.