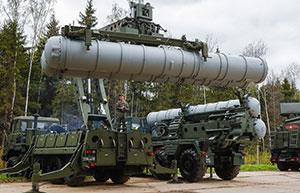 “The discussion of technical issues is over but it is still necessary to resolve purely administrative matters. On the one hand, it is the government of Turkey that must make a decision but, on the other hand, we must make a decision. And there is also a financial issue: the Turkish authorities are holding negotiations with our Finance Ministry. They will find some funds themselves and will also borrow some funds,” Chemezov said at the MAKS-2017 international airshow outside Moscow.
Russian Presidential Adviser for Military and Technical Cooperation Vladimir Kozhin said in late June that Russia’s contract with Turkey on the delivery of S-400 long-range air defense missile systems had been agreed while the issue of loan provision had yet to be settled.
International Cooperation and Regional Policy Department Chief of Russia’s Rostec state hi-tech corporation Viktor Kladov earlier told TASS that Russia and Turkey had agreed on the technical issues of the delivery of S-400 Triumf (NATO reporting name: SA-21 Growler) surface-to-air missile systems.
He said, however, that the contract had not been signed yet and the sides were discussing the non-technical terms of the deal.
“There are commercial issues, monetary and financial and political issues,” he said.
Russia’s S-400 Triumf is the latest long-range antiaircraft missile system that went into service in 2007. It is designed to destroy aircraft, cruise and ballistic missiles, including medium-range missiles, and can also be used against ground objectives.
The S-400 can engage targets at a distance of 400 km and at an altitude of up to 30 km.
Russian Aerospace Force Deputy Commander-in-Chief Viktor Gumyonny said in April that missiles capable of destroying targets in outer space had started arriving for the S-400 systems.