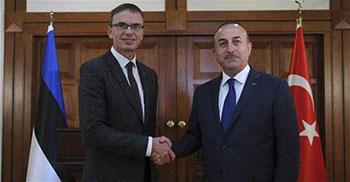 Turkey has vowed “different processes” were ahead regarding Cyprus after a U.N.-led conference failed to provide a settlement to the decades-old division in the island, announcing a joint work with Turkish Cypriots for a road map.

“There will be different processes on Cyprus afterwards. This can’t go like this forever. I must say this. We have taken political risks and we have always been one step ahead for the solution since we came to power. But if one party does not want it, then it should be dealt accordingly,” Foreign Minister Mevlüt Çavuşoğlu told reporters at a joint press conference with visiting Estonian Foreign Minister Sven Mikser on July 18.

Çavuşoğlu said he will hold talks with the Turkish Cypriot leadership in order to agree on a road map.

Prime Minister Binali Yıldırım will also visit the island on July 20 to attend the 43rd anniversary of Turkey’s intervention in the island.

Recalling that the U.N. conference in Switzerland failed to yield a result because of Greek Cyprus’ unwillingness, just like they refused the Annan Plan in 2004, Çavuşoğlu called on the EU not to repeat the same mistake it made a decade ago.

“The EU had not kept its promises. Now, embargos and restrictions imposed on Turkish Cyprus need to be lifted. These [embargos] are not humane,” Çavuşoğlu said.

The minister, however, underlined that Greek Cypriots have been “spoiled” and rewarded by the EU in the aftermath of 2004 process, criticizing the EU for allowing this.

On Greek Cyprus’ unilateral activities for exploration and drilling hydro carbon reserves off the island, Çavuşoğlu said Turkish Cypriots also have their share in the reserves.