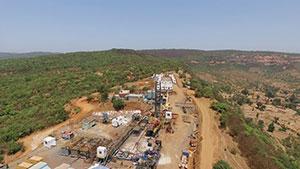 By Soutik Biswas -BBC News, Karad
In the windswept skein of mountains in India’s Western Ghats, geologists are drilling some of Asia’s deepest boreholes in an audacious attempt to unlock the mysteries of earthquakes.