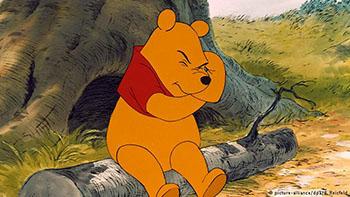 Pooh Bear went missing on Chinese social media, most likely because he looks so much like one of the country’s most powerful men – President Xi Jinping.
The beloved’s children’s book character, Winnie-the-Pooh, has disappeared from the internet in China. The bear that became internationally popular through the Walt Disney animated films has been blocked by censors on social media sites, since he was often compared to China’s President Xi Jinping.
Xi, the bear?

Back in June 2013, the Chinese president visited US President Obama at Rancho Mirage, in California. The statesmen discussed American-Chinese relations. China’s press described the talks as “ranch diplomacy.” But the headlines that grabbed the most attention were the ones comparing the two presidents to Winnie the Pooh and Tigger, showing Xi and Obama in almost identical positions.
It continued when the Chinese president visited Japanese Prime Minister Shinzo Abe in November 2014, during the APEC Summit in Beijing. Once again, an image of Pooh Bear was found to reflect the similarities between the president’s appearance and that of the bear, while Abe found his counterpart in the donkey Eeyore.
At a military parade in October 2015 celebrating the 70th anniversary of the end of World War II, another comparison with the famous bear was found:
Censors have no sense of humor
Chinese authorities were not laughing, however. Search terms related to Winnie-the-Pooh have been blocked on various sites.
Tencent, one of the country’s most important IT giants and operator of WeChat, a chat program with 938 million users worldwide, used to offer emojis depicting Tigger and Pooh Bear. DW tried to download them – in vain. Tencent appears to have made them unavailable.
On Weibo, the micro-blogging platform in China, attempts to write a comment containing the Chinese terms for Winnie-the-Pooh temporarily led to the following error message: “Unfortunately, you have violated Weibo’s policies. This action may not be performed.” On Tuesday, the error message no longer appeared.
A question of timing
The upcoming 19th Party Congress of the Communist Party of China in the autumn of 2017 might help explain why so much fuss is made over the cartoon character. During that congress, new top leaders of the Politburo Standing Committee will be elected, as a majority of the current leadership is retiring due to age.
Xi Jinping is expected to continue as general secretary of the Communist Party. He is seeking support from the majority of his party and to retain his image as a public figure of authority, so comparisons with a sweet, but dim-witted bear do not quite fit.