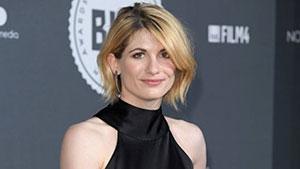 While the vast majority of people chose to receive the news with joy and excitement, it didn’t come without its detractors. You know the type. The BBC is ruining our childhoods! More PC crap from the feminazi left! Watch as the ratings tank! I am a tiny man with low self esteem and I’m scared of women!

This kind of reaction is expected from the internet’s contingent of petulant man-babies. They’re not exactly known for their rationality. But how did the UK’s Sun newspaper choose to respond to a casting choice that literally had girls around the world squealing in excitement?

By scouring Whittaker’s performance archive to capture still shots of her in the nude and publishing them alongside a sneering editorial dismissing the selection as “virtue signalling” that was “frankly nauseating”.

Because God forbid a woman be allowed to “steal” something from a man without feeling the dead weight of aggrieved baby-men everywhere come crashing down on her.

To borrow an example from another icon of pop culture, this is just like season six of Buffy The Vampire Slayer and the misogynist villain, Warren. Warren’s crimes throughout the season become more intensely focused on using a combination of magic and tech wizardry to control the women around him, resulting at one point in the death of an ex-girlfriend coerced into becoming a Stepford-like sex slave.

When Buffy foils his final scheme and publicly destroys the two power orbs that give him unfathomable physical strength (the imagery is hardly subtle), he experiences the defeat as humiliating emasculation. “You think you can just do that to me?! You think I’d let you get away with that?!” he screams at her, before trying to shoot her dead.

He misses the fatal shot, but the point lands squarely on target: men like Warren do not like women showing them up. And when it happens, which it invariably does, they’ll work as hard as they can to enact their revenge.

This is what’s really behind the attempts to humiliate and undermine Whittaker by publishing these stills. They’re hardly private, but the effort required to go through and capture them purely for the purpose of embarrassing her (You think you can just do that to me?! You think I’d let you get away with that?!) makes this even more of a petty, vindictive display.

The Sun is a newspaper that, for almost all of its history, has been synonymous with Page 3 girls. This deliberate attempt to diminish Whittaker is a reminder that women’s greatest value at the end of the day is not as Time Lords, Prime Ministers or super heroes, but as titillating diversions for the men who get to routinely imagine themselves as Time Lords, Prime Ministers and super heroes.

The most galling thing isn’t just the editorial decisions at play here but the fact that, for women working in the film and television industry, the expectation of nudity is practically a given – at least until enough fame and collateral has been amassed to negotiate an equal say with the largely male leadership teams that oversee production.

Publishing nude stills from Whittaker’s past work isn’t just an act of disparagement from a low-rent newspaper currying favour with its rankled male readership. It’s also a reminder that no matter the heights her career ascends to (or any woman’s career in front of the camera, for that matter), she can always be reduced to the naked ingenue being instructed to strip off for an invisible audience.

I’m sure Whittaker doesn’t feel overly disempowered by the Sun’s attempts to embarrass her. She’s still going to be the 13th Doctor after all. But the Sun couldn’t be more blatant in its disdain for a world where little girls might be entitled to have heroes, too.

In their vision of this world, a move towards diverse storytelling and women who are more than just ciphers and rewards isn’t necessary progress. It’s political-correctness-gone-mad, appeasement of the triggered snowflake patrol and tokenistic rubbish.

Isn’t it funny how almost every conversation that concerns itself with the “tokenism” of diversity and “merit” never, ever questions whether the mostly white and mostly male people who get to headline every aspect of life are there because they deserve to be? The merit of white men is just assumed.

Twelve white male Doctors before Jodie Whittaker, and not a single one of them opposed on the basis of being a white man. A Northerner, sure. Too young, yeah. Not someone’s cup of tea, of course. But never, ever because they were a white man benefiting from cultural prejudice.

What we’re seeing now is the screeching death throes of a particular demographic of men who cannot stand that the world is changing. Worse, that the woman they have traditionally seen themselves portrayed as superior to are suddenly outstripping them without a second glance back. This isn’t what the pop culture they grew up with promised them! Men shape the stories and win the affection of the girls. So it ever was and so it ever shall be.

But that’s the great thing about change. It happens whether people like it or not.