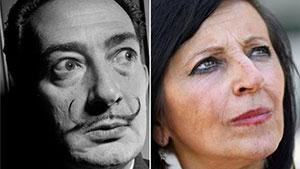 By Guy Hedgecoe Madrid
The body of the artist Salvador Dalí is due to be exhumed late on Thursday in order to settle a paternity suit brought by a woman who claims to be his daughter.

The surrealist painter, who died in 1989 at the age of 85, was buried in a crypt in a museum dedicated to his life and work in Figueres, in north-eastern Spain. Samples will be taken from his remains to see if they match the DNA of the claimant.
The process is going ahead despite the objections of the local authorities and the foundation carrying Dalí’s name, both of which claimed that not enough notice had been given ahead of the exhumation.
It will require the removal of a 1.5-tonne slab covering his tomb in order to reach his body.
María Pilar Abel Martínez, a tarot card reader who was born in 1956, says her mother had an affair with Dalí during the year before her birth. Her mother, Antonia, had worked for a family that spent time in Cadaqués, near the painter’s home.
Last month a Madrid judge ordered the exhumation to settle the claim. It is contested by the Dalí foundation, which manages the estate of the artist, who was not believed to have had any children.
Ms Martínez says her mother and paternal grandmother both told her at an early age that Dalí was her real father. She told El Mundo newspaper that her grandmother said to her: “I love you a lot but I know that you’re not the daughter of my son. What’s more, I know who your father is – he is Salvador Dalí.”
One day, Ms Martínez says, she asked her mother: “Am I really Salvador Dali’s daughter? Because look at how ugly he was.” She says her mother replied: “Yes, but he had his charms. And yes, he is your father.”
Ms Martínez’s action is against the Spanish state, to which Dalí left his estate. If she is confirmed to be his daughter, she could assume his surname and be entitled to part of that estate.
But the story of the supposed affair has surprised many – not so much because Dalí was married in 1955, but because of his complex sexual tastes. And for some, this is why the thought of Dalí making a woman pregnant seems unlikely.
Ian Gibson, an Irish-born biographer of Dalí, says the idea of the Catalan artist ever having had an orthodox physical relationship with a woman is “absolutely impossible”, despite five decades of marriage to Elena Ivanova Diakonova, his Russian wife more commonly known as Gala.
“Dalí always boasted: ‘I’m impotent, you’ve got to be impotent to be a great painter’,” the biographer said.

His close friendship with the gay poet Federico García Lorca has fuelled speculation that Dalí was homosexual, although Ian Gibson believes they never consummated their relationship.
Carlos Lozano, who was for a time part of the painter’s inner circle, told the biographer that “Dalí was totally unable to have any sexual relations with anybody, not even, probably, with Gala… He hated being touched and when he touched you it was like being clawed by an eagle.”
Dalí’s sexual eccentricities appeared to feed into his work and in 1956, the year of Ms Martínez’s birth, he wrote in his diary: “I feel in a state of permanent intellectual erection.”
Paintings such as The Great Masturbator (1929), in which a woman’s face emerges out of the side of a giant human profile, beneath which a large winged insect is resting, and nuzzles against a man’s bulging groin, contributed to his reputation for bizarre erotic tastes.
Lluís Llongueras, an artist and writer who knew Dalí from the early 1960s until his death, traces much of his friend’s attitude to sex back to his childhood. He says that when Dalí was a teenager his father traumatised him by constantly showing him pictures of penises mutilated by syphilis.
However, Llongueras says Dalí’s preference for watching others engaging in physical contact rather than doing so himself made perfect sense for someone with his gifts.
“He was an artist and so he was a great voyeur – all of us artists have to be voyeurs, otherwise how could we work with the human body?” he said.
But Dalí’s interests went beyond eroticism and the human form, straying into memory, religion and even the world of science. His 1963 painting Galacidalacidesoxiribunucleicacid is a tribute to Francis Crick and James D. Watson, the scientists who identified the structure of DNA.
“I think that Dalí would greatly enjoy being exhumed, it’s a totally surrealist event,” said Gibson. “He’d be thrilled, I’m quite sure, by the whole business.”