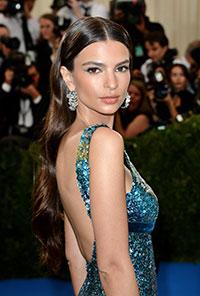 The star is continuing to speak out about issues of feminism.

By Lucy Mapstone, Press Association Deputy Entertainment Editor
Actress and model Emily Ratajkowsi has said it “bothers” her that people are offended by breasts.
The 26-year-old, who went topless in thriller film Gone Girl and was nearly nude in Robin Thicke’s controversial Blurred Lines music video, said that she believes society’s view on breasts is down to their representation as “vulgar” and “oversexualised”.
Ratajkowski told US beauty magazine Allure: “It really bothers me that people are so offended by breasts.
“That’s when I realised how f***** our culture is.
“When we see breasts, we don’t think of beauty and femininity. We think of vulgar, oversexualised images.”
Ratajkowski is known for speaking out about an array of feminist issues, and has written several open letters asking for body equality for women and for the female form to be considered as empowering.
Last year she made headlines when she posed topless alongside Kim Kardashian West on social media in support of the reality star, who had received criticism for a similar image, the pair holding their middle fingers up in a retaliation to being “shamed”.
She said: “To me, any expression that is empowered and is your own as a woman is feminist.
“If a woman decides to dress sexy, it doesn’t mean she’s not a feminist. (We) should be doing things for ourselves. If that is the woman’s choice, and it makes her feel good, then that’s great. Good for her.”
Asked by the interviewer if she considers that breasts are thought of as “sexy” because a man decided as such, and so women use them to impress, Ratajkowski said: “I found my sexuality and my identity.
“I found empowerment through that.”
Press Association