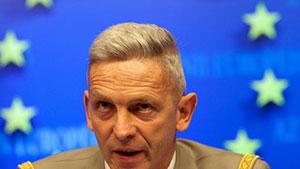 Paris: The resignation of the head of France’s military has thrown the spotlight on President Emmanuel Macron’s lack of experience and may prove to be the first major test of his governing style.

Following a public dispute with Macron over cuts to the defense budget, General Pierre de Villiers, chief of the general staff, said on Wednesday that he “no longer feels capable of assuring the continuation of the military model” needed to protect France.

The resignation is a first by a head of the French military since Charles de Gaulle remade the constitution in 1958 and represents one of the biggest challenges to Macron’s authority since he took office two months ago. It follows quarrels over a dearth of university places, a flip-flop on the timing of tax cuts and criticism of vague plans for funding municipalities. Le Monde newspaper called it the “moment of truth” for France’s new president.

“It sends a negative signal and shows dissent at the helm of the state,” said Christelle Craplet, a pollster at BVA institute in Paris. “Macron is at a crucial moment: the end of the political honeymoon with voters and the beginning of the reality.”

Macron, 39, is the first French president who has neither been in the army nor done now-scrapped mandatory military service. Charles De Gaulle, Georges Pompidou and Valery Giscard d’Estaing participated in World War II, as did Francois Mitterrand. Jacques Chirac fought in the Algerian war. Nicolas Sarkozy and Francois Hollande both did military service under France’s post-war draft, which Chirac ended in the 1990s.

“Juvenile authoritarian behaviour has broken the trust” between the government and the military, said the retired general Vincent Desportes in an editorial to be published in Thursday’s Le Monde.

Macron’s approval rating fell 5 points to 54 per cent in July, according to a monthly poll by BVA for Orange and La Tribune published Tuesday. Respondents with a poor opinion of Macron cite his arrogance, authoritarianism, disregard for the working classes and excessive attention to communication.

While Macron has shown a liking for the French military, travelling to visit troops in Africa and ostentatiously being filmed jumping onto a nuclear submarine, he was quick to censure de Villiers when he complained about cuts to military spending.

Speaking on July 13 at a reception for military personnel taking part in the next day’s Bastille Day parade, Macron shot back that by saying “I am your chief” and “consider it undignified to expose certain debates in public”.

“By saying he is the boss he exposes himself,” said Bruno Cautres, a political scientist at SciencesPo in Paris. “So far the situation is under his control, but if he fails to fulfil his promises on budget, unemployment and reforms in the months to come he’ll be totally exposed and his posture will back fire.”

Faced with a 2017 budget deficit that was overshooting targets agreed with the European Union, Macron’s government imposed spending cuts of €4.5 billion ($6.5 billion) across all ministries, of which €850 million will come from the military, mostly by postponing equipment purchases.

De Villiers said in an opinion piece in last Friday’s Figaro newspaper that there’s a “strong tension” between France’s overseas military operations and “a complicated budget situation”, and that “this gap is not sustainable”. According to French media reports, de Villiers was more outspoken at a closed door testimony July 12 to members of parliament, and since last week news reports had suggested he could resign.

De Villiers was present at the parade Friday alongside Macron. He was due to meet Macron on Wednesday as part of the weekly security cabinet meeting he attends with the president, and