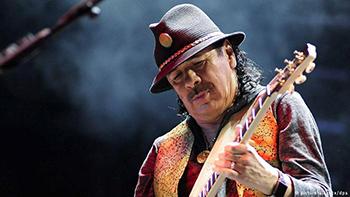 Last week, Moro sentenced the ex-president to 9.5 years in jail for taking bribes. The politician, widely known as “Lula,” is just one of Brazil’s key political and business leaders who faced charges over the massive “Car Wash” corruption scandal.
The judge said the freeze was necessary “for the reparation of damages that originated in the crimes.” He added that some of the money has been lost as part of lucrative contracts with state oil company Petrobras.
“It was not possible to trace the rest of the bribes paid in connection with the corruption at Petrobras,” Moro wrote. “It is possible it has been used to illegally finance electoral campaigns.”
The judge is currently enjoying a growing popularity in Brazil as an anti-corruption crusader.
Lula rejects accusations
As Carlos Santana hits his 70th birthday, the icon shows no signs of slowing down. Famous for his psychedelic guitar solos and musical fusion, he continues to reach audiences worldwide.
Most working individuals approaching their 70th birthday would be looking forward to retirement. But that isn’t the case for legendary rocker Carlos Santana, who turns 70 on July 20. “I’m retired from retiring,” the Mexican-born, naturalized American citizen told Rolling Stone music magazine in an interview.
Over the 70 years of his life, Santana has been making music for 65 of them as a pioneering musician who has crossed musical boundaries with his unique blend of Latin, Afro, blues, jazz, salsa and rock influences.
Though according to his website, he has already sold over 100 million records and reached over 100 million fans at worldwide concerts, Santana shows no sign of slowing down. Just eight days after he kicks off his eighth decade of life, he will release a new album entitled the “The Power of Peace” on digital, CD and vinyl formats.
From Mexico to San Francisco
Though Santana became famous for his blues-style solo electric guitar riffs, his first instrument was actually the violin. Born in Autlan de Navarro, Mexico, on July 20, 1947, Santana’s father, a mariachi musician, began teaching the boy violin at age five and guitar from age eight.
Santana listened to the music of the early American rocker Ritchie Valens, who is best known for combining his Mexican roots with a rock beat in the 1958 hit “La Bamba.” Little did Santana know that he, too – like Valens – would become a pioneering artist of Latin-influenced rock. His other musical idols included guitar legends such as B.B. King, T-Bone Walker, Ray Charles, and John Lee Hooker, whose influence can be heard throughout Santana’s career in his blues-tinted guitar lines.
Santana’s family eventually moved to San Francisco, California, where he completed high school but chose not to attend college, instead working as a dishwasher, busking for change, and playing in bands whenever he had the chance.
San Francisco’s booming 1960’s counterculture movement highly influenced Santana, expanding his musical exposure and political perspectives.
“Mahatma Gandhi, Malcolm X, Martin Luther King, Che Guevara, Mother Teresa – they led a revolution of conscience,” Santana has said of the era. “The Beatles, the Doors, Jimi Hendrix created revolution and evolution themes. The music was like Dali, with many colors and revolutionary ways.”
The chance that made a lifetime of music
Santana got his lucky break in 1966 when he was asked to step on-stage as a last-minute replacement for an intoxicated fellow musician at the Fillmore West, a popular rock hall in San Francisco. His gripping performance caught the ears of both the audience and a key producer. Shortly thereafter, Santana created the “Santana Blues Band,” later shortened to just “Santana,” and was signed to Columbia Records. He was now set to rock the world with his band’s distinctive sound and his long and lilting solo guitar melodies.
In August 1969, Santana and his band performed at the legendary Woodstock Festival and released their first self-titled album. The album single, “Evil Ways,” reached number four on the US album charts. He and the band continued to perform and record new albums throughout the 60s and 70s, producing such long-lasting hits such as “Oye Como Va” and “Black Magic Women.”
Plunging into spirituality
However, the group was plagued by conflict of musical interests, musicians’ drug use, and financial problems. In 1973, Santana turned to meditation and spirituality, taking on the name Devadip, which means “the lamp, light and eye of God.”
At the same time, his musical style moved towards jazz fusion and included Eastern Indian musical influences, which – while critically praised – resulted in a loss of sales. Santana moved away from spirituality after a 1982 falling-out with his guru and set his sights on recharging his commercial appeal.
Though he continued touring throughout the 80s and early 90s, it wasn’t until the late 90s that he found himself back at the top of the music world.
Back to the top
In 1999, Santana collaborated with rock group Matchbox Twenty’s Rob Thomas to produce the cha-cha rock hit “Smooth” which, similarly to Santana’s earlier music, highlighted the guitarist’s wailing solos and united Latin instruments with rock sound. The single’s album, “Supernatural,” went on to sell nearly 27 million copies worldwide and earned Santana eight Grammys including Album of the Year.
Global musician, global activist
Santana is not only a pan-cultural musician but also a global activist. In 1998, the rocker and his family founded the Milagro (“Miracle”) Foundation dedicated to helping vulnerable and underserved children in the areas of arts, education and health.
His 2014 memoir “The Universal Tone: Bringing my Story to Light” highlights his personal journey and his belief in the infinite potential of every individual. “Love is the light that is inside of all of us, everyone,” he wrote, in a nod to his spiritual influence. “I salute the light that you are and that is inside your heart.”
Santana currently lives with his wife and drummer Cindy Blackman in Las Vegas, Nevada. He has three children from a previous marriage.