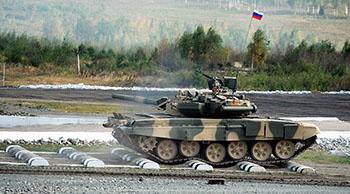 A Kremlin aide has confirmed that the Iraqi armed forces will soon take delivery of Russian-made T-90 battle tanks. The Russian hardware will be deployed alongside the US M1A1 Abrams tanks.
“A significant contract for a large batch” of T-90 tanks, has been signed between Baghdad and manufacturer Uralvagonzavod, Vladimir Kozhin, an aide to the Russian president on military-technical cooperation told the Izvestiya daily.

“I cannot disclose the exact cost [of the tank contract] but the number [of tanks] is substantial,” Kozhin added.
Earlier, Uralvagonzavod indicated that it will deliver 73 T-90S/SK tanks to Iraq this year. A yearly report for 2016 published earlier in July by the manufacturer mentioned a contract with “foreign customer 368”, i.e. Iraq, to be fulfilled in 2017.
T-90S is the designation of the export version of the armor while “SK” stands for the export version meant for a unit commander.
Iraq’s Ministry of Defense has also confirmed the purchase of the Russian tanks.
According to Izvestiya’s report, the shipment of 70 T-90 would be followed by more deliveries. The armor sale may amount to “hundreds” of tanks and surpass $1 billion.
Russia’s Federal Service for Military-Technical Cooperation, which supervises Moscow’s arms trade, declined to comment on the details.
Iraq made the decision to purchase the Russian military hardware following the successful performance of the tanks in Syria, the publication noted.
Highlighting the growing demand for Russian weaponry given their effectiveness in Syria, President Vladimir Putin earlier this month noted the need to expand Russian arms sales abroad.
Putin stressed though, that the proliferation of military technology should in no way impact negatively on the strategic balance of power in regions where the weapons are sold to. Instead of fueling conflict, weapons should be used to prevent it, the Russian leader emphasized.
“All our decisions on supplies of arms to external markets are based on the current international situation in various regions – in order to prevent any imbalances and to avoid an escalation of conflicts. On the contrary, our weapons must be used to contain conflicts at the early stages,” Putin underlined.
Kozhin meanwhile told the Izvestiya newspaper that Kuwait is also interested in purchasing the T-90s.