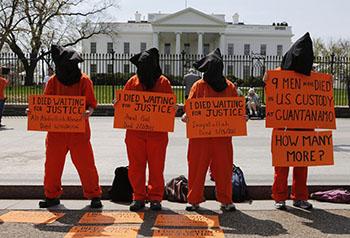 Former officials of both parties have endorsed the goal. But the 41 inmates left there have reason to wonder if they’ll ever leave.
Tomorrow marks the six-month anniversary of the inauguration of President Donald J. Trump. But today marks six months since another key event: the most recent resettlement of detainees from Guantanamo Bay. On January 19, the last full day of the Obama presidency, one detainee from the detention facility arrived in Saudi Arabia and three landed in the United Arab Emirates. If Trump lives up to his pledge not to allow any further releases, those four will be the last to leave the facility for at least four years—maybe longer. The 41 who remain must wonder whether departure is even conceivable under a president who, as a candidate, promised that to keep the detention facility open and “load it up with some bad dudes.”