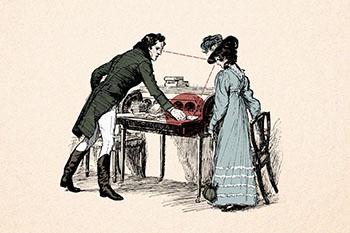 The novelist had a soft spot for awkward talkers and stumbling lovers—which was an immense relief for me growing up as a shy person.
Here is a way to win the woman you’ve loved for eight years from afar: When you see her again, avoid speaking. Jump up and leave when she is in earshot. Do her small favors, especially ones that put you within touching distance—but never let her thank you, and be sure to avoid her gaze. Eavesdrop vigorously; should she say anything that suggests she returns your feelings, write her a letter and hurry out of the room. No, wait, come back! You need to make sure that she’s seen it, so point to the letter and stare at her earnestly, mumbling that you’ve forgotten your gloves. Are you cringing? Don’t worry about Captain Wentworth. Anne Elliot finds him persuasive.