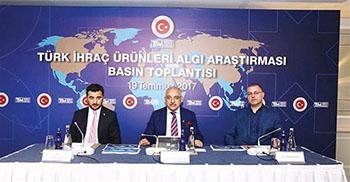 Almost two-thirds of companies in Turkey’s top 26 markets are happy with Turkish goods, with Britain, France and India voicing the biggest content, a fresh survey showed on July 19.

Businesses in some European countries, including Turkey’s top market Germany, however, voiced lower contentedness levels, pushing down the European average to 59 percent, according to the survey, which was released by the Turkish Exporters Assembly (TİM) in Istanbul.

TİM held face-to-face interviews with representatives from 2,520 companies, the association’s president Mehmet Büyükekşi said at a press meeting in Istanbul.

The largest number of interviews was made in the United States, where some 180 meetings were made. This country was followed by Russia with 150 interviews and Iran, Italy and Israel with 120 interviews for each, Büyükekşi said.

Some 88 percent of participants did not make any negative comments on Turkish goods and 62 percent voiced their contentedness with these goods, he said.

“Britain was the most-content country with 85 percent, followed by France with 77 percent and India with 74 percent,” Büyükekşi added.

The EU average was, however, 59 percent, mainly due to negative comments in the Netherlands, Poland and Germany, he said, adding that Turkish exporters should adopt a special emphasis for these countries to increase their satisfaction levels with Turkish goods.

While almost half of Dutch companies said they are happy with Turkish goods, this rate was 57 percent in Germany, according to TİM data.

On the basis of industrial groups, the highest approval level was seen in the electric, electronics and machinery sector with 65 percent, Büyükekşi said.

“We must increase these rates up to 90 percent,” Büyükekşi said.

Some 60 percent of the survey participants said they had a positive perception of Turkey, according to the study.

“Some 12 percent of the participants said they had a negative image of Turkey in their minds,” Büyükekşi said, adding that an image building campaign was launched to rebound Turkey’s perception abroad under the leadership of the economy ministry.

“We have reached 517 million people so far in seven countries in the framework of this campaign. Our aim is to reach 2.6 billion people,” he added.

Spain, Germany and India are among the countries where perception of Turkey is the brightest, according to the TİM survey.