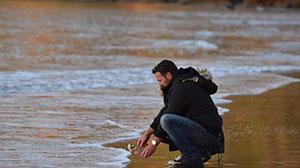 Minneapolis: Justine Damond was the kind of woman who’d rescue ducks in distress – and humans.

Three weeks ago, she was climbing into a storm drain, to rescue a bunch of ducklings near her home on the city’s Southside. And late on Saturday night she went into the alley behind her home – to see if she could help a woman in distress.

By chance, the duck rescue occurred outside the home of a photojournalist – who cheerfully recorded it all on video. But there is nothing cheerful in a recording of the 911 call made by the 40-year-old Australian, before she went into the alley – and to her death, by the hand of one of the cops dispatched in response to her call.

Time-stamped at 11.27pm, the transcript is a mesmerising read because, unlike the duck rescue, it reveals a good natured person doing what she does – but nothing of the horrible consequences of her call.

Operator: 911, what’s the address of the emergency?

Damond: Hi, I’m, I can hear someone out the back and I, I’m not sure if she’s having sex or being raped.

Operator: Give me the address.

Damond: And there’s a (inaudible) out the back, yup, yup. And I think she just yelled out “help”, but it’s difficult the sound has been going on for a while, but I think, I don’t think she’s enjoying it. I think it’s, I don’t know.

Operator: Okay, well I already got a call started and help on the way. Uh, you can’t see anything, you’re just hearing a female screaming then, is that what you’re saying?

Damond: Yeah. It sounds like sex noises, but it’s been going on for a while and I think she tried to say help and it sounds distressed.

Operator: Okay, I’ve already got an officer on the way. What is your name?

Operator: And a phone number?

Operator: Okay, we’ve already got help on the way. If anything changes before we get there just give us a call right back, but officers should be there soon.

Operator: Okay, not a problem.

About eight minutes later, Damond was back on the phone to the cops, just to make sure that the operator had recorded her address in the Minneapolis suburbs correctly. The operator assured her that a squad car was on its way.

Two rookie cops were in the car – Matthew Harrity and Mohamed Noor. Noor is refusing to be interviewed by investigators, but by Harrity’s account, excerpts of which were released on Tuesday, a loud bang occurred before Damond approached the driver’s side window of the car – at which point Noor, in the passenger seat, raised a gun he had been cradling in his lap, and fired across Harrity’s chest, through the window.

Damond, in her pyjamas and carrying only a cell phone, was hit in the stomach – and died at the scene about 20 minutes later.

On Tuesday, the loud sound reported by Harrity was reportedly fireworks – giving rise to speculation that Noor had been spooked by the fireworks, possibly thinking they were under attack. But on Wednesday, a new narrative emerged – a local TV station was told that Harrity and Noor thought the noise was someone pounding on the panels of their vehicle, as a result of which they figured they were being ambushed.

Apparently, they had concluded there was nothing to Damond’s 911 report and were heading to their next assignment. They were observing a cyclist, somewhere between 18 and 25 years old, as he/she rode eastward on 51st St when they heard the pounding.

And in a surprising new twist to a drama that has transfixed Minneapolis and Australia, it emerged on Wednesday that some of the cop’s encounter with Damond might have been recorded on video.

There has been much criticism of Noor and Harrity’s reported failure to activate their body-cams or their car’s dash-cam. But according to the local KSTP news channel, the unidentified cyclist had circled back – and had made a video recording the cops’ attempt to resuscitate Damond.

Harrity’s attorney, Fred Bruno, told local reporters it was reasonable for the cops to assume they were the targets of an ambush – “It’s certainly reasonable to assume that any police officer would be concerned about a possible ambush under these circumstances. It was only a few weeks ago when a female NYPD cop and mother of twins was executed in her car in a very similar scenario.”

Bruno’s NYPD reference was to the July 5 killing, in New York, of 48-year-old officer Miosotis Family, who died when a mentally ill man shot her in the head as she sat in her squad car in the Bronx.